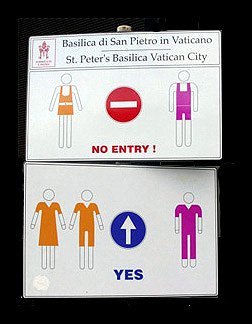 I’m talking about the yoga pants trend that has swept our city and is now beginning to show up at every mass in Milwaukee.  I affectionately refer to the women sporting these “pants” in our churches as “Becky’s”.  I’m sure you’ve spotted them too. You know, those little sartorial sideshows that seem to descend from the rafters and land right in front of you at church, with their posterior shamelessly pointed at you imitating AE’s spray on jeans in a can ad. Yes, those are the ones I’ll be talking about.  So I guess all of those girls donning the stretchy pants from the lululemon phenomenon were just too sheer for Bikram, and we now have the privilege of staring at them in our pews. No, not really.

Monica Hesse and Jessica Goldstein of The Washington Post recently wrote an article that I found particularly poignant, and clearly conveys my gripe with this girlie attention seeking non-sense.  Wrote Goldstein and Hess:

The sweatpant of the 1980s, the Juicy velour suit of the 2000s — both of these had a shlumpy, self-deprecating modesty. They were casual in a way that covered assets instead of exposing them; people wore sweatpants when they felt bad. Yoga pants, even when opaque and functioning exactly as they are supposed to — are a pants designed for exhibitionists. They expose too much, they leave nothing to the imagination, they are the Twitter of clothing.

You see, I never wanted Becky or Bertha wearing hot pants in my church, but now that it’s everywhere, there will be no more pretending that I’m not amazed at what I’ve been seeing out there folks.  In our post-pill, porn-saturated culture, it’s no surprise to see women carelessly promenading down the sidewalk on Brady Street shaking their tail feather.  And frankly, unless they’re arrested for indecent exposure there’s nothing I can do about it.  But the often abject indifference of some Catholic clerics in Milwaukee towards saucy women who decide to traipse into church’s waving their thang around without consequence is inexcusable, and something I take great umbrage to.  Since when did we become so weak that we’ve allowed ourselves to be puppeteered by what’s in-vogue, and simply acquiesce to these social modalities that dictate what one can wear, and how low one can wear it, in Church?