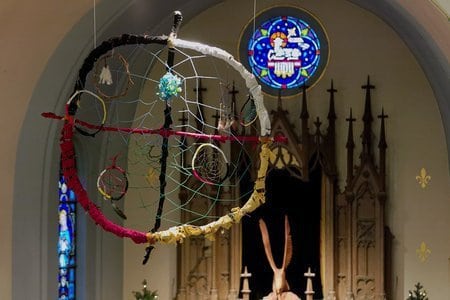 Appropriate? A Dream Catcher and the Cross (Image from parish website)

The Congregation of the Great Spirit (CotGS) is a Native American Catholic parish on the South Side of Milwaukee. What is a Native American Catholic parish, you ask? Good question. Keep reading. My earliest exposure to this parish was when the pastor visited Christ King, where I attended grade school in the late nineties. Come to think of it, this was my earliest indication that something was off kilter in this archdiocese. While the end was mercifully drawing near, Archbishop Weakland and the Archdiocesan Village People were still doing the Electric Slide across the Cream City Catholic scene. For faithful Catholics, these were hard times.

Christ King and the CotGS were “sister parishes” and cooperated on various initiatives throughout the year. At this time, I was very young, eleven or twelve, but my youth didn’t prevent me from being very disturbed by what happened one Sunday at Mass. As a powwow unfolded in the sanctuary, with the beating of drums and Native American chant filling the spacious church (accompanied by the burning of…something) the entire congregation was ordered in rhythmic commands to face the four corners of the earth. It was very strange. Totally foreign. In other words, welcome to parish life in Milwaukee! After the in-the-santuary powwow, I was disoriented. Whether it was from the quasi-pagan ritual I just participated in, or the four-corners-of-the-earth spin around, or the effects of the happy smoke I inhaled, I can’t say.  I also vaguely remember rambling preaching about Mother Earth and her living, breathing spirit. Hey man, cool…

The following week, this inchoate CCC scribbler brought his Sunday Mass concerns to the associate pastor, who agreed that what took place was not at all appropriate. But associate pastors, I’ve since learned, possess just a little more authority at their parish than the wee altar boys, so he really couldn’t do anything about it. Life went on. Weakland smiled. The faithful…well, endured.

Fast-forward some twenty years and the Congregation of the Great Spirit is still around. For years, the archdiocese subsidized the struggling parish in a patronizing attempt to prove to the world how diverse and inclusive it is. But after the scandals and lawsuits, the money ain’t flowing like it used to, so the subsidies have stopped.

So, just what is the CotGS about? I have not attended liturgy there, but from the looks of their website, they live up to their claim that they “do things a little different.” Check it out and you’ll quickly see what I mean. Native American objects, like feathers, are used in a quasi-sacramental way. (Keep in mind this is a Catholic parish!) Reviewing the page that limns their “traditions” and rituals you find things like:

The people of Turtle Island use smudging to help clear our minds and to help cleanse our body of all negative things. It is a process that began when our people were given our helpers, the fire.  It started with our first medicine, which was tobacco.  Tobacco was burned in the fire.  Eventually we were given the pipe.  We smoked the pipe, asked that our minds be clear, and have only good thoughts in whatever we were doing that day.  After a while we received three more medicines to help us in this way, including cedar, sweetgrass and sage.  All of these medicines help us in the same way as tobacco.  They are also used as internal and external medicines when used with other herbs and plants.

The ceremonial process of smudging helps us to clear our minds and bodies so that we may make good decisions without negative interfering. [I have to admit, I have no idea what’s going on here.] We must remember that some people have different ways of doing traditional things, we must respect them.  We do not have to participate, but respect must always be there.

The same respect should be given to us in our traditional ways and not be criticized. [Says who?]  If different ways of doing traditional things offends others in any way, then they should not participate, just as we would not participate in anything that offends us. [But being Catholic means acting a certain way and believing in certain things…] We all have to acknowledge and respect others’ beliefs in order to teach our young ones the right way.  If we criticize and disrespect others, what are our children going to learn? We also have to learn to be humble.  Share whatever knowledge you have with others so there will be a lot less misunderstanding.

As you peruse the “beliefs” page, you’ll find other “traditions” held by the CotGS. You’ll read about “The Eagle”, the “Medicine Box”, “The Circle” and then there’s “Smoke”. I’m not kidding, check it out. Just make sure you’re sitting down. Now, we haven’t even talked about the Dream Catcher with a cross in the middle that hangs in the church, and legitimate questions regarding syncretism already start to surface. What is syncretism? Renown theologian Father John A. Hardon S.J., defined it as,

The effort to unite different doctrines and practices, especially in religion. … But in recent years the term mainly refers to misguided claims that religious unity can be achieved by ignoring the differences between faiths on the assumption that all creeds are essentially one and the same.

I think it’s fair to ask these questions. Of course, we’re expecting the ad hominem retorts of “intolerance”, and of being “mean-spirited” etc. It’s an easy way to dodge tough questions. The truth is, I’m not bashing anyone. Native Americans, like every group, deserve the undiluted message of the Catholic Faith. It represents, in fact, a grave disservice to them to water-down the teachings and traditions of the Church in an attempt to bring them in. That’s what we call pandering, and it’s insulting.

Another ironic point: The website prominently features the beautiful Saint Kateri Tekakwitha as their Patron Saint. This is, of course, understandable and admirable. But I don’t think this young Saint would have recognized or approved of the liturgies that take place at the CotGS, with its blend of pagan and Catholic practices. I take that back. I know she wouldn’t. What would she be familiar with? The timeless Latin Mass! When she attended liturgy, it would have been according to what we now call the Extraordinary Form of the Mass! The Lily of the Mohawks would have felt more at home at Milwaukee’s Saint Stanislaus Parish than at the CotGS! She was a loyal daughter of the Church, and would no doubt be very troubled by the watered-down liturgies of the CotGS.