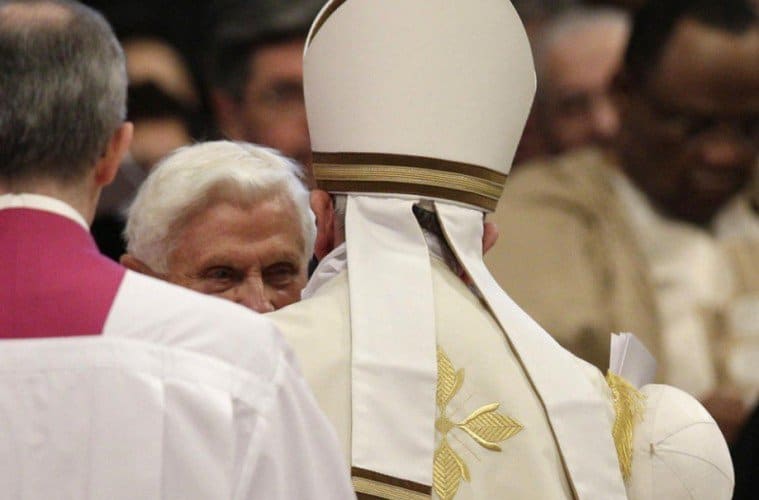 Historic Day at the Vatican If you were at Saint Peter’s in Rome today, you were treated to an unprecedented event, as Pope Francis elevated 19 men to the College of Cardinals. All in a day’s work for the Bishop of Rome. But what was extraordinary was the unexpected presence of Pope Emeritus Benedict XVI who, as the AP reported, entered the Basilica of Saint Peter shortly before the ceremony and, as “first among Cardinals” took his seat in the front row among and watched the proceedings. Those in the Basilica were reportedly stunned and many were in tears when Benedict entered. After processing into Saint Peter’s, Pope Francis immediately embraced his predecessor and Benedict, in a traditional sign of respect, removed his zuccehetto. The newly minted Cardinals, after receiving their red birettas from the Pope, went directly to the Pope-Emeritus to greet him.

News stories added that, in light of today’s events, it is more likely now that the Pope Emeritus will attend the canonization of Blessed Pope John Paul II and Blessed John XXIII. The optics of that solemn event, a pope canonizing two of his predecessors in the presence of his immediate and living predecessor, will be truly extraordinary.