2016 marks the 150th anniversary of Saint Stanislaus Parish, on the South Side of Milwaukee. Various events are planned in September to mark the joyful occasion. The parish has seen a lot of changes over the years. It started off as the center of life for Milwaukee’s Polish immigrant community. Then, from the ’60s though the ’90s, it saw a precipitous decline in members, to the point that many were considering how much longer it would be open. That was then. 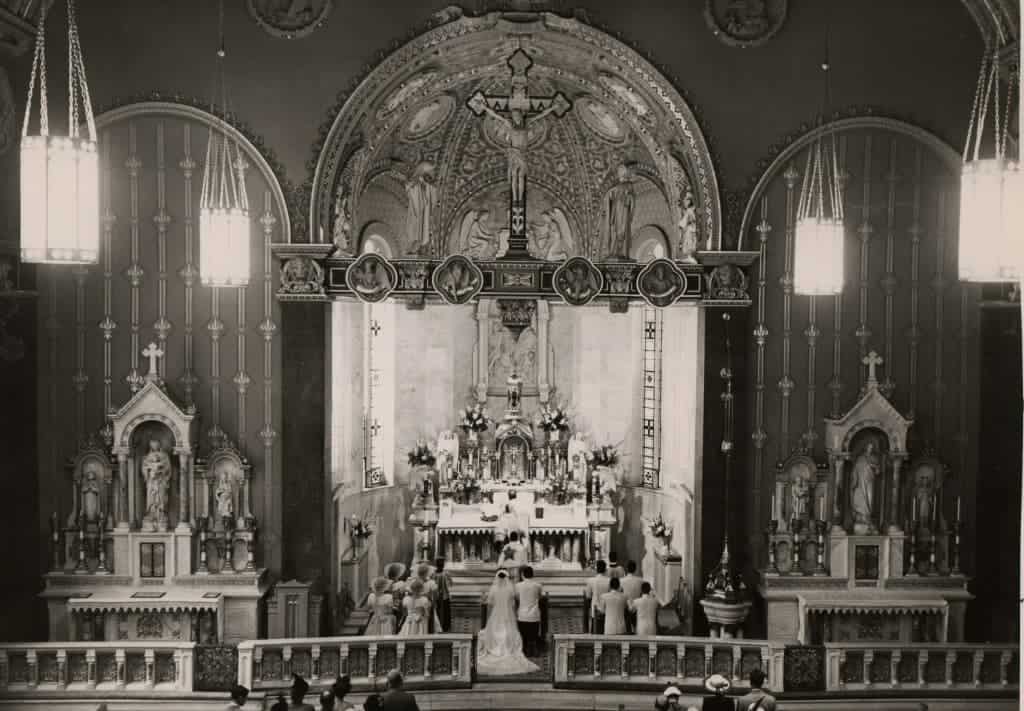 Photo of a wedding at Saint Stanislaus, probably in the 1940s.

Today, Saint Stanislaus is booming once more, under the care of the Institute of Christ the King Sovereign Priest. It is Milwaukee’s only traditional Latin Mass parish. (It’s worth mentioning that the 19th and 20th-century Polish immigrants would have instantly recognized the rituals of the traditional Mass offered today at Saint Stanislaus.) Since the Institute took over parish life, it has undergone a renaissance, with a steadily-growing number of parishioners. One of the initiatives for the parish’s 150th anniversary is an ambitious restoration project to bring the building back to the its original beauty. I’ve documented this effort quite extensively on CCC. 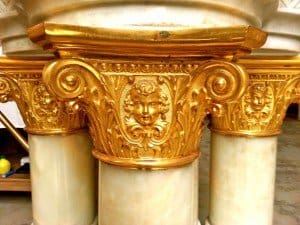 A while back, I met with the rector of Saint Stanislaus, Canon Benoît Jayr, a native of Montauban, France, who has been at the parish since 2011. He filled me in on the particulars of the fascinating restoration project, and showed me old photos dating from the early years of Saint Stanislaus, which now serve as invaluable reference points for the ongoing work of restoration. So much has already been done: installment of traditional windows in the sanctuary, complete restoration of the original high altar, removal of carpeting, new tiling throughout the church, the relocation of the beautiful marble baptismal font to nave. Next up is the new Communion rail from Italy, made of white marble and green onyx columns. 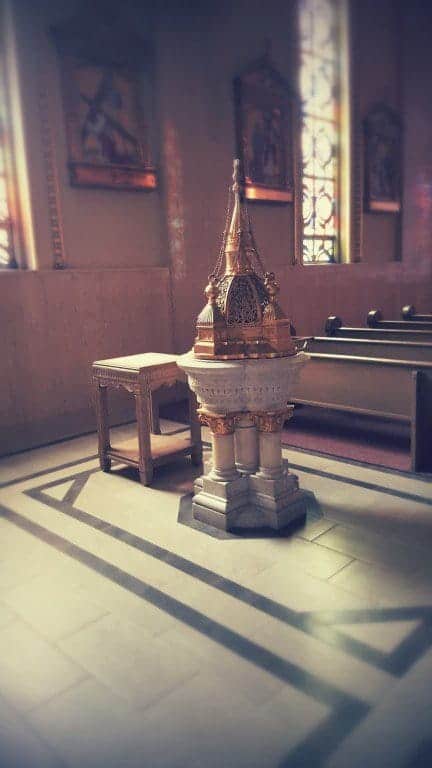 In the course of our conversation, we also discussed parish life in general, the appeal of the Latin Mass to the younger generation of Catholics, the importance of tradition, and Canon’s Montauban-to-Milwaukee transition. Enjoy the interview!

What is the driving motivation behind the renovations at Saint Stanislaus? Some might say, “What’s the point?” Is this just about one’s aesthetic preference over another’s?

We have a beautiful Polish inheritance here and, I believe, we have a solemn duty to preserve that patrimony. The continuity and preservation of these traditions, even in terms of architecture, are extremely important for the missionary impact of Saint Stanislaus, which is, of course, the conversion of souls. The parish building itself is well-known. Visitors who arrive at Mitchell International Airport will see the church recreated, along with other famous Milwaukee buildings, in a colorful floor mosaic. So already, the church greets visitors even before they see the actual building. We can also say that the building itself is a tool for evangelization, and not just a historical building. When talking about the decision to restore the original integrity of the interior I must add that many of the 1960s renovations are totally opposed to the basic architectural style of the original building. Anyone will notice that the modern windows and the renovated sanctuary, for example, are not congruous with the original design.

In your view, what was the reason why so many of these radical and financially exorbitant renovations took place in Catholic churches across America in the 1960s and after? For example, what inspired the removal of altar rails?

In the Church, and in society in the 1960s, we saw a big desire to change everything. It was a time of great turnover, we could say, and of innovation. The scope of such renovations in church buildings was allegedly to give more dynamism. It was supposed to represent a new spring for the Church. But this season was disappointing, as the promised fruits did not show up. 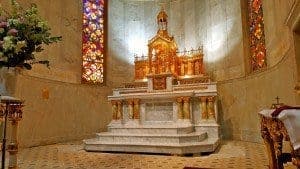 As a member of the parish, I am regularly impressed by the large number of young adults and families that are parishioners here. During Sunday mass, it seems like the entire back half of the church is taken up by numerous young families with lots of kids. I’ve observed younger Catholics flocking to traditional parishes in many cities across America, and I’ve heard that the same is true in France. Some may find it surprising that young people, instead of demanding novelty and innovation and reviling tradition, are actively seeking out and demanding tradition. How do you account for this phenomenon?

Obviously, this young generation does not merely have a sentimental nostalgia for the old times, since they didn’t experience those times first-hand. This liturgy corresponds to a strong desire for an interior life. The young are very sensitive to reverence in liturgy, worship, and adoration. From the start, this liturgy requires from those who discover the Latin Mass something very demanding, because today, of course, no one speaks Latin. This generation wants something with depth; they desire to find in the Mass a direct contact with the presence of the divinity. The silence and reverence of the Mass are very appealing as well to this generation. All over the world, parishes that offer the Latin Mass are filled with young Catholics. This is very true in France (as in America), as we see many young people and very large and numerous families. (It is often a concert of babies in the back of church!) I will say also that the young need strong reference points in an increasingly hostile, secular culture. In this secular world, the Latin liturgy brings the sacred down to earth, which is precisely what we need.

How can the Latin Mass, with its emphasis on ancient tradition, benefit a world and culture that place so much emphasis on “out with the old”?

The Latin Mass is rooted in the early church. It brings stability, depth and a permanent, unchanging reference point to our world, which is always moving, always changing. This liturgy focuses on God. In a society that is increasingly self-centered, the Latin Mass is conspicuously theo-centric, God-centered.

What are some common misconceptions you hear about the Latin Mass that you would like to set straight?

The main concern that we hear is “We do not understand what the priest is saying.” But think about it, can anyone really understand that which is a mystery? If you want to approach God, give up your own personal concepts and quest for certitude. The traditional liturgy asks us to be more receptive, and open to interior contemplation, instead of being busy and active. It helps us feel less agitated. The use of Latin leads us in this mystery because this language is not a daily language; it is reserved solely to talk with God. Further, this language is stable, the meaning of the words do not change to express the truths of faith, which are by definition eternal, immutable. The use of the Latin language also mirrors the unity of the Catholic Church. In our modern time, we travel a lot, and it is nice to find the exact same liturgy, wherever you may be. Latin brings together, it unites, rather than scatters. Finally, the priest offering Mass ad orientem (facing East) is like the shepherd leading the flock to heaven. We do not need to see the smiling face of the priest, with his beautiful white teeth, in order to pray stronger. The efficacy of the Mass does not depend on the quality of the “actor.” The Mass is not a TV show! It is totally different. It is adoration given to God, not adoration of the community. 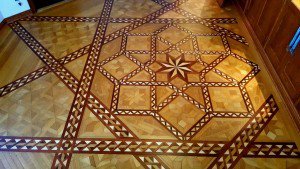 Seminarians of the Institute of Christ the King come from all around the world. What common thread unites this diverse group of young men? Why are they attracted to the mission of the Institute?

Young men from all over the world reach the Institute of Christ the King and here they can find a true sense of the universality of the Church, which transcends the national particularities of the different cultures. There is a strong sense of what we call in Rome “romanitas” which is, more or less, the living, visible culture of the Roman Catholic Church. The Institute also teaches seminarians how to become good priests, how to serve souls and, of course, the Church. At the Institute, they find a strong spirit of family and, during the seven years of formation in the seminary at Gricigliano, which is near Florence, they develop a true zeal for this service to God.

We’re a long way from France. What are your early impressions of living in Milwaukee?

I like Milwaukee because it was founded by a French man, Solomon Juneau! Also, it is a land of cheese, like France! For a European, Milwaukee is a great window to discover America. This city is not too big and not too small. The lake however is like the sea. The people here are very welcoming. My parishioners are very helpful with me, even when they don’t understand my accented English! As for the faith of the people, this region is the heart of America, where you find a strong faith and deep values. Of course, it is not the America you see on the television screen in France, unfortunately. Simply put, here it is the real America. 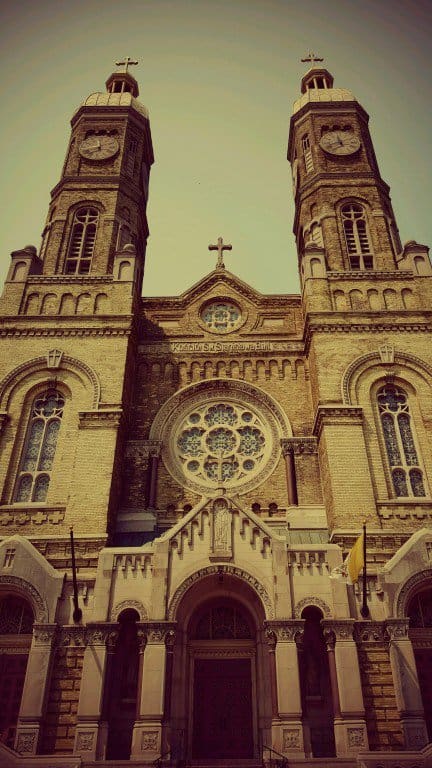