With what sort of terrible things things, then, is the brave man concerned? Surely with the greatest; for no one is more likely than he to stand his ground against what is awe-inspiring.

I recently watched Lone Survivor, a 2013 film about a four-man Navy SEAL team that was sent into Afghanistan in search of a high priority target in June, 2005. After being ambushed by a large, heavily armed Taliban force, only one of the SEALs, Marcus Luttrell, survived and he sustained severe injuries as a result of the fierce fighting. Several years ago, I read Luttrell’s book, Lone Survivor, a firsthand and highly-detailed account of the mission called Operation Red Wing. Both the movie and book are excellent. I thought I’d offer some thoughts on the positive themes in the story.

Strong leadership: To release the suspicious goat herders who unexpectedly crossed paths with the SEAL team or not? Releasing them would place the lives of the SEALs at far greater risk, but in addition to ethical considerations, killing them to prevent knowledge of the reconnaissance team’s presence would be a disaster when the media found out. A difficult call had to be made and disagreements were there. Choice words were exchanged. But once the decision was made by the team leader, Lieutenant Michael Murphy, to release the captives the discussion was over and the entire team got on board. (As soon as they were released, the herders made a beeline for the Taliban forces to relay the SEALs’ location.) Leadership and the ability to be clear and firm, are often sorely lacking in our culture, so seeing such conspicuous displays of both in the movie was refreshing.

Brotherhood: The bond between the members of this SEAL team was inspiring. The book and film show this quite well. Who wouldn’t be honored to have a friend like one of these SEALs? The shared trials and agony during Operation Red Wings drew this already tight-knit group even closer. Even death could not drive a wedge between them. 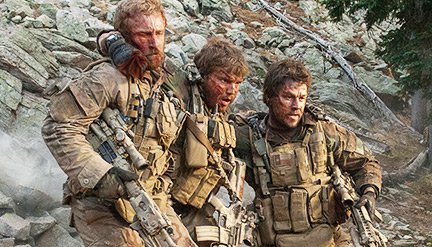 Heroism and Sacrifice: When the film concludes, and as you watch pictures of the fallen fade in and out on the screen, you cannot help but be impressed with the conduct of the SEALs, and with Michael Murphy in particular. Knowing he would die, he exposed himself to direct enemy fire in order to get a clear satellite signal to request immediate backup for his men. The men of this elite team force the viewer to ask himself: “Would I have the inner strength to do the same thing? And, if not, how can I improve?” While they fought tooth and nail for survival, these SEALs realized and accepted that death by far wasn’t the worst fate that could befall them; it was letting their brothers down, failing to be there for the other. If death came, so be it. Death is preferable to letting down the guy fighting next to me.

Unapologetically masculine: In a time of increased gender confusion, when traditional masculinity is maligned and even mocked as boorish, obsolete and oppressive, guys need a reminder of what it means to be real men. Pop-culture elevates ridiculous examples of feckless, “beta males” who either are barely out of adolescence themselves or who are in fact, grown men permanently locked in a mindset of adolescence, timidness and self-absortion.

The men in Lone Survivor buck pop-culture’s silly narrative of the ubiquitous, immature, celebrity-boy-man always chasing the spotlight. Obsession with what others think, endless mirror gazing, and shameless self-promotion are not manly qualities, and one gets the sense that these SEALs don’t really care what others think of them. They’re calm, confident and secure, and have no need for worldly affirmation and attention from the shallow movers and shakers of pop-culture. They revel in anonymity.

I’m drawn to examples of counter-cultural behavior, and these SEALs fit the bill.

Dealing with pain, injury and death: One of the standout scenes from the movie was when the SEALs plummeted down steep cliffs while they were engaging the huge Taliban force. The falls were excruciatingly brutal, and often the result of a nearby grenade blast. The terrain on the way down was littered with blunt boulders and jagged rocks jutting up from the ground. On numerous occasions, these rocks broke the SEALs’ free fall. Their heads, backs, legs and arms crashed against these massive rocks as they tumbled down the sides of the cliffs. Their bodies were slowly broken down by a combination of blasts, bullets and boulders. And yet, when they landed hard against these rocks, they still fought and fought. “How much can a body take?” I kept asking myself. “At what point will they break?” But as long as they were breathing, they never broke, and that required a heroic act of the will. No rational person enjoys pain and injury, but when confronted with high doses of both, these SEALs didn’t run away, complain or ask “Why me?” They set their jaws, endured the pain and continued to fight. When death finally caught up with the SEALs, it was met with great bravery. As Aristotle put it:

It is for facing what is painful, then . . . that men are called brave. Hence also courage involves pain, and is justly praised; for it is harder to face what is painful than to abstain from what is pleasant.

Physicality: It’s clear from the very beginning of the film, which shows actual footage of the laborious, mind and body breaking SEAL tryouts, that these are big guys. They’re strong, menacing and fierce. In the real world, dangers and evil sometimes must be countered with balanced force, and raw strength. These are the men who are tasked with that role, and we all should be thankful they’re on our side. Not everyone can be a SEAL of course. That’s what makes them so exceptional. But on those very rare occasions, men should be ready and willing to meet force with force, for instance, when protecting loved ones from harm or death. And being physically ready for that time can’t hurt.