One thing we often stress on Cream City Catholic is the importance of familiarizing oneself with Church documents regarding the sacred liturgy. The sorry state of formation in so many quarters, from parishes to schools and even families makes this need all the more pressing. Thankfully, with the Internet, we can access many of these documents with the click of a key.

Many Catholics, while highly educated in other areas, are largely ignorant about the most basic aspects of the sacred liturgy. We all need the reminder from Pope Benedict XVI who said, “Everything rises or falls with the liturgy.” As for myself over the past few years, the more I read and learned about the beauty and richness of the liturgy, the more I’ve been better able to enter into the liturgy in a more complete, prayerful way. I realize how, growing up, there was a lot I simply didn’t know, and it took a lot of reading and catching up to fill in those crucial gaps. But it was well-worth the effort.

Let’s take just one example of an all-too-common misconception when it comes to liturgy and “active participation”: the over-reliance on so-called “Eucharistic Ministers” (correctly called Extraordinary Ministers of Holy Communion).

There is no greater moment this side of the mortal barrier than our reception of Christ in the Eucharist at Mass. Everything we experience with our senses leading up to that sublime moment of encounter should elevate our minds to contemplate Him before us. Conscious of our sins, we should also contemplate our own smallness and utter dependence on His mercy and love. We know that angels surround the altar and humbly worship Christ along with us. With that in mind, is it not the least bit disruptive to our interior preparation to witness a small band of casually dressed “Ministers” marching into the sanctuary, surrounding the altar and then picking up a ciborium or chalice, both of which contain the King of Kings? It should be noted that, for centuries, it was expressly forbidden for anyone but the priest to touch the Blessed Sacrament with his hands. There was an obvious reason behind this rule.

The care and attention people give to something (whatever it is) will largely be determined by their observations of how that thing is treated or handled by others. Something precious and valuable will be handled with great care and attention, and typically only by authorized people. Those watching will quickly get the message: “This is very important.” Something common and ordinary and of little value will be handled by more people and with far less consideration. If rules regulating how the Eucharist is handled become overly democratized (as they certainly have been) people will gradually lose a sense of its inestimable value and even its very meaning.

Seeing people dressed just like I’m dressed (no liturgical vestments) and living a life just like I am living (as a layman) handle the Eucharist will naturally result in a lowering of the bar in terms of my perception of how sacred the Eucharist is. This rings all the more true in our day, when catechesis regarding the true teaching of the Real Presence is so low. I would posit that this same argument can be applied even more strongly to the ubiquitous practice of the laity receiving Communion in the hand instead of the ancient practice of receiving on the tongue. One form of reception naturally and clearly demonstrates an awareness of the sacred.

To suggest that we’ve lost a sense of the sacred at Mass is hardly controversial. So why not take concrete steps to restore it? One of those steps is to limit (or virtually eliminate) the reliance on Extraordinary Ministers of Holy Communion. Even if it takes longer for the priest to distribute Communion by himself, so what? Think about it. Christ, the Second Person of the Blessed Trinity, has lovingly and mercifully come down to us from heaven for our benefit in Holy Communion. And are we going to object about the time it takes for the priest to distribute Communion? As we wait, can’t we spend a little more time in prayer, united to Him in this Sacrament?

Ask yourself this question: Has the explosion of so-called “Eucharistic Ministers” at Mass truly helped build up or nurture a culture of reverence, awe and adoration before Our Lord in the Blessed Sacrament? I don’t think anyone could seriously answer in the affirmative. No doubt, many serving in this capacity believe they are doing a great service to their parish. But we nevertheless need to entertain the likelihood that, whatever the intentions or motivations of particular individuals, the over-reliance on Extraordinary Minsters has directly contributed to a weakening of many Catholics’ appreciation for the sacredness of this sublime Sacrament.

Let’s look at what some of our canonized forbears have said about how the Sacred Host and vessels should be handled. 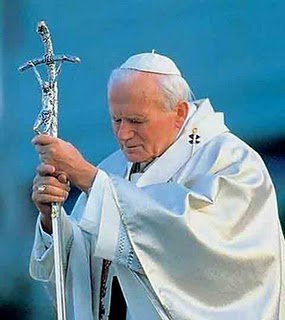 Pope Saint John Paul II: To touch the sacred species and to distribute them with their own hands is a privilege of the ordained. (Dominicae Cenae, 11)

Saint Thomas Aquinas (1225-1274): Out of reverence towards this Sacrament [the Holy Eucharist], nothing touches it, but what is consecrated; hence the corporal and the chalice are consecrated, and likewise the priest’s hands, for touching this Sacrament. (Summa Theologica, Part III, Q. 82, Art. 3, Rep. Obj. 8.)

Pope Saint Sixtus 1 (circa 115): “The Sacred Vessels are not to be handled by others than those consecrated to the Lord.”

CONGREGATION FOR DIVINE WORSHIP
AND THE DISCIPLINE OF THE SACRAMENT

1. The Extraordinary Minister of Holy Communion

[154.] As has already been recalled, “the only minister who can confect the Sacrament of the Eucharist in persona Christi is a validly ordained Priest”.[254] Hence the name “minister of the Eucharist” belongs properly to the Priest alone. Moreover, also by reason of their sacred Ordination, the ordinary ministers of Holy Communion are the Bishop, the Priest and the Deacon,[255] to whom it belongs therefore to administer Holy Communion to the lay members of Christ’s faithful during the celebration of Mass. In this way their ministerial office in the Church is fully and accurately brought to light, and the sign value of the Sacrament is made complete.

[155.] In addition to the ordinary ministers there is the formally instituted acolyte, who by virtue of his institution is an extraordinary minister of Holy Communion even outside the celebration of Mass. If, moreover, reasons of real necessity prompt it, another lay member of Christ’s faithful may also be delegated by the diocesan Bishop, in accordance with the norm of law,[256] for one occasion or for a specified time, and an appropriate formula of blessing may be used for the occasion. This act of appointment, however, does not necessarily take a liturgical form, nor, if it does take a liturgical form, should it resemble sacred Ordination in any way. Finally, in special cases of an unforeseen nature, permission can be given for a single occasion by the Priest who presides at the celebration of the Eucharist.[257]

[157.] If there is usually present a sufficient number of sacred ministers for the distribution of Holy Communion, extraordinary ministers of Holy Communion may not be appointed. Indeed, in such circumstances, those who may have already been appointed to this ministry should not exercise it. The practice of those Priests is reprobated who, even though present at the celebration, abstain from distributing Communion and hand this function over to laypersons.[258]

[158.] Indeed, the extraordinary minister of Holy Communion may administer Communion only when the Priest and Deacon are lacking, when the Priest is prevented by weakness or advanced age or some other genuine reason, or when the number of faithful coming to Communion is so great that the very celebration of Mass would be unduly prolonged.[259]This, however, is to be understood in such a way that a brief prolongation, considering the circumstances and culture of the place, is not at all a sufficient reason.

[159.] It is never allowed for the extraordinary minister of Holy Communion to delegate anyone else to administer the Eucharist, as for example a parent or spouse or child of the sick person who is the communicant.

[160.] Let the diocesan Bishop give renewed consideration to the practice in recent years regarding this matter, and if circumstances call for it, let him correct it or define it more precisely. Where such extraordinary ministers are appointed in a widespread manner out of true necessity, the diocesan Bishop should issue special norms by which he determines the manner in which this function is to be carried out in accordance with the law, bearing in mind the tradition of the Church.