There’s nothing random about the items used at liturgy. Symbolism is embedded in everything. These symbols are significant because they focus the mind on transcendent, invisible realities. The various elements associated with the Eucharist are heavily saturated with symbolism, and they direct our minds to the true presence of Christ in the Eucharist. These symbols are all directly tied to the events and items associated with Christ’s Passion.

A recent interview between the National Catholic Register’s Edward Pentin and German journalist Paul Badde discussed newly uncovered details about the burial shroud of Christ, the sudarium (the square cloth placed over Christ’s face in the tomb), and the liturgy of the early Church. The interview unpacks recent research on the ancient liturgy by a German theologian and friend of Pope Benedict XVI, Klaus Berger.

The interview is fascinating. Here’s an excerpt.

What is the significance of altar linen — does it date back to these two priceless relics [the shroud and sudarium]?
Yes, from this we can understand why the altar linen, analogous to the shroud, until 1969, had to be “pure linen” and why the so-called corporal must always be folded in a particular way by way of analogy with the sudarium. John says that, after Christ’s resurrection, it was found by Peter and John in the empty tomb: “not lying with the linen cloths but rolled up or folded (enteeligmenon in Greek) in a separate place.” That corporal is the starched cloth, which, in the old rite, after the priest had come at the altar in contact with the bread and wine, could only be touched by him reverently with his thumb and forefinger.

How is the altar significant in this?
Since the altar linens of the liturgy are called sindon and sudarium and theologically are in connection with the Real Presence of Jesus in his body and blood, Berger contends that their purpose is to point to the mystery of the Eucharist on the altar stone. There, the inanimate matter of the bread and wine — as the tomb of Christ in the rock in Jerusalem, which had never been used — is always transformed into the “Bread of Life” and living blood of Christ.

Read the entire interview. It’s short, but certainly worth the time.

The next time you see the altar at your parish, think of Christ’s tomb and the stone slab upon which His body rested, and rose gloriously after three days. When you see the white corporal used by the priest during the Mass (and upon which the consecrated Host rests) think of the sudarium “not lying with the linen cloths but rolled up in a separate place” in the tomb in Jerusalem 2,000 years ago. When you see the white linen that covers the marble altar, think of the Shroud of Turin, which covered Christ’s body in the tomb. How can this not help our appreciation for what’s really taking place, albeit invisibly, during Mass? 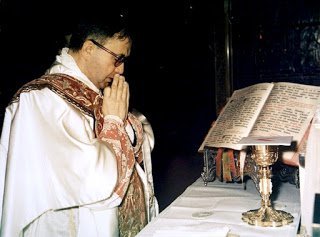 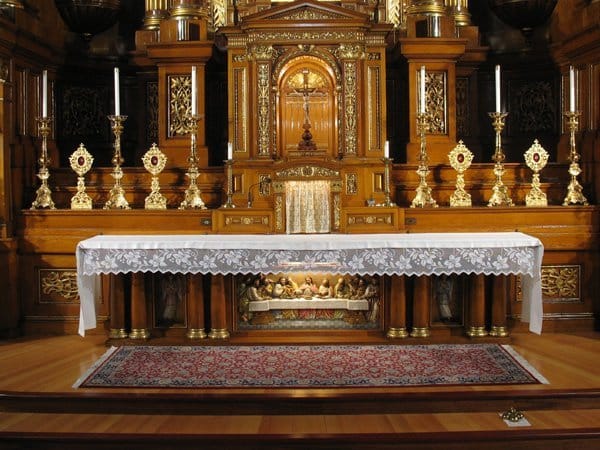