Latin: “the glory of priests”

I recently found a collection of papal addresses on education. It begins with Pope Pius VII (papacy: 1800 – 1823) and ends with Pope Saint John XXIII (papacy: 1958 – 1963). The ten popes in the volume address various groups: seminarians, mothers and fathers, young students in Rome, and, of course, bishops and priests. One topic that received particularly strong attention from Pope Pius XII was Latin. In an address to professors of the Discalced Carmelites, Pope Pius XII lamented (in 1951!) the evaporating influence of Latin in the Church.

Unfortunately, the Latin language, the glory of priests, has only a few languishing promoters. How can the praise of this regal language . . . be worthily sung; this language which not only expresses, but depicts the truth, which in edicts and sentences stands out for its particular solemnity; this language which is the liturgical language of the Latin Church and which, lastly, is the bond of maximum value in the Catholic Church! Let there be no priest who does not know how to read and speak it fluently and with ease! . . .

And indeed, it is the Latin and also the Greek language which, since the first Christian era, is the depository of many ecclesiastical writings and is a treasure of incomparable excellence. Consequently, the sacred minister who ignores it, is to be regarded as a man of deplorable intellectual poverty.

The florid language in this address might strike us in 2017. But the linguistic style should not relegate the overall point to irrelevance. The pope is not just engaging in romanticism. In the outstanding encyclical on liturgy, Mediator Dei, Pius XII wisely cautions against appealing to antiquity for antiquity’s sake as justification for how things should be done in liturgy today. “…it is neither wise nor laudable to reduce everything to antiquity by every possible device. (Mediator Dei, 61) So in light of this, one cannot say that his high estimation for Latin in the address cited here is simply a case of rear-view mirror nostalgia or cult-of-the-past romanticism for a bygone era. Latin, Pius XII clearly believed, should transcend the centuries. Its importance for Catholics cannot be dated or frozen in a particular time.

Addressing Roman students a few years earlier in 1949, Pius XII had this to say on the topic of Latin:

Latin! A language, ancient but not dead, whose superb echo, even if not heard for centuries in the ruined amphitheaters, the famous forums and temples of the caesars, is not silent in Christ’s basilicas, where the priests of the Gospel and heirs of the martyrs repeat and sing again the psalms and the hymns of the first centuries in the reconsecrated language of the Quirites [early Romans]. Now, the language of Rome is principally a sacred language, which is heard in the divine rites, in the theological halls and in the Acts of the Apostolic See, and in which you yourselves often address a sweet greeting to the Queen of Heaven, your Mother, and to your Father Who reigns above.

Latin in the liturgy shows the universality of the church. Let’s pray for a rediscovery of the wisdom contained in these forgotten addresses of a great pope of the twentieth century. 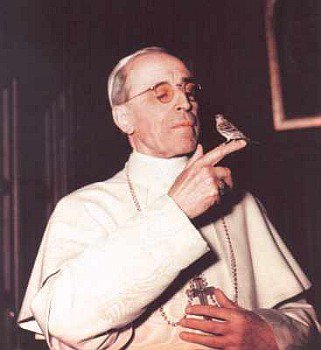