Have you noticed how, increasingly in movies, television and culture in general, men are depicted more like cosseted children and self-absorbed, hormone-driven doofuses than respectable adults? It’s pretty embarrassing. The calm, rugged, respectable and selfless man, governed by self-control and reason, is becoming a thing of the distant past like a fading black and white photo, as a cult of perpetual immaturity, softness and narcissism takes over. The au courant label is “beta male.”

Writing over one-hundred years ago, Cardinal John Henry Newman sounded the alarm on an ancient tendency linked to our fallen nature:

It is when men are mature in years, and yet are “children in understanding,” then they are intolerable, because they have exceeded their season and are out of place. Then it is that ambitious thoughts, trifling pursuits and amusements, passionate wishes and keen hopes, and the love of display, are directly sinful because they are by that time deliberate sins. 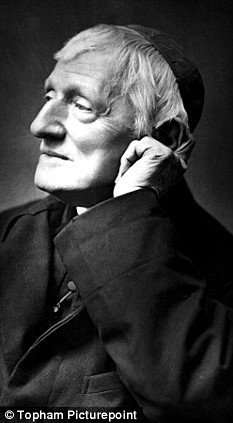 In his sermon entitled Christian Manhood, Cardinal Newman describes the principle pitfalls in the spiritual life that stymie the full maturation of the Catholic man. To get the ball rolling, he relies on Scripture to present the reader with a contrast between the Apostles’ behavior before and after Pentecost. Prior to Pentecost, the Apostles were preoccupied with petty, worldly things, like who among them was greatest, or pedantic questions like exactly how many times someone should be forgiven. Such concerns are, “inconsistent with a manly, honest profession of the Gospel” according to Newman. Pentecost, the descent of the Holy Spirit, changed all that. Read the Acts of the Apostles.

Newman goes to great lengths to emphasize that the Apostles, prior to Pentecost, were not immoral men as a result of their shortcomings, but they were childish because of them and required significant pruning in order to reach true perfection. (He also draws a line between unrepentant souls persisting in serious sin and those grappling with minor faults, while also striving for virtue.) So what does this spiritual childishness mean, and how does one attain what Newman calls “manhood in the Gospel”?

First off, let’s identify the problem. According to Newman, these stubborn roadblocks to Christian manhood are:

. . . the love of display, greediness of the world’s praise, and the love of the comforts and luxuries of life. . . . timidity, irresolution, fear of ridicule, weakness of purpose . . . are to be numbered among the tempers of mind which are childish, as well as sinful.

Have you noticed how all of these qualities are rampant today in our culture of shameless self-promotion and narcissism? As a study in contrasts, this is how Pope-emeritus Benedict XVI recently described Pope Saint John Paul II.

[He] did not seek applause, nor did he ever look round anxiously, wondering how his decisions would be received. He acted on the basis of his faith and his insight and was willing to suffer blows. The courage of the truth is in my view a first-class criterion of his sanctity.

The life of Pope John Paul II shows the world what “manhood in the Gospel” means. Throughout this short sermon, Newman places particular emphasis on the dangers of the “love of display,” also known as vanity.

Love of display is one of these; whether we are vain of our abilities, or our acquirements, or our wealth, or our personal appearance; whether we discover our weakness in taking much, or in love of managing, or again in love of dress. Vanity, indeed, and conceit are always disagreeable . . .

So then what, according to Newman, is the remedy for conquering the hallmarks of Christian childishness? He offers a list of requisites:

Distinguish between the excellent and the base. . . . to put off idle hopes of earthly good, to be sick of flattery and the world’s praise, to see the emptiness of temporal greatness, and to be watchful against self-indugence, check every evil thought, and bring the whole mind into captivity to the law of Christ; to be patient, cheerful, forgiving, meek, honest, and true; to persevere in this good work till death . . . to break with the world, and make religion our first concern, is only to cease to be children.

Embracing such counter-cultural habits and virtues is extremely edifying because their acquisition and mastery require hard work and discipline, unlike the easy, beta male road of comfort and self-indulgence. When you find patience, mercy and honesty present in someone, aren’t you instantly drawn to that person?

Cardinal Newman also cautions against falling into the trap of idleness and pious dreaming, which results in the neglect of concrete action, sacrifices and good deeds. He reminds us that enjoying the good things of the earth as they come to us is not at all sinful; it is only when we “prefer them to God’s righteousness” that they become obstacles to sanctity. Newman’s wise counsel serves as a much-needed antidote to the ubiquitous plague of perpetual childishness and self-absortion in our society.