“Many marriages are not good; they do not please Our Lord and are not of God.” – Our Lady of Fatima.

With this powerful message, given exactly one-hundred years ago, we are reminded that marriage is a beautiful Sacrament, a gift from God, one that we should receive with great care and seriousness. It is the Church’s duty to lead the laity in her teaching by fostering holy marriages that glorify God.

Before my marriage, my fiancé and I had the chance to experience a Marriage Preparation Conference, a diocesan requirement for those planning to get married. Sadly, our experience left much to be desired.

The conference was well attended, with an estimated number of fifty couples gathered in a gymnasium, and commenced with an introduction by a priest on the principles of marriage.

During the introduction, the priest stumbled upon the topic of cohabitation, and addressed it seemingly with more concern not to offend the laity, rather than think about what was best for our souls. He announced quite openly that he knew most of the couples present were cohabitating and, rather than remind us that cohabitation is immoral, he left us with an easily obtained statistic gleaned from the internet: people who cohabitate before marriage are fifty-percent more likely to get a divorce than those who do not. After announcing this statistic, he hurriedly ended the discussion on cohabitation, and we moved on.

That was it for cohabitation: a loose statistic with no reference to actual Church teaching. Yes, the stat. is certainly correct. According to the United States Conference of Catholic Bishops’ (USCCB) website, couples who cohabitate are fifty-percent more likely to get divorced than couples who do not cohabitate prior to marriage. Although this is certainly dreadful, the priest at our course never brought up the Catholic Catechism, which provides a clear and theologically rich teaching on cohabitation. According to the CCC #502, cohabitation is a recognized offense against the dignity of marriage. Church teaching is plain as day. Why not present that instead of defaulting to a dry (but true) statistic?

Cohabitation is a fairly recent phenomenon, and its popularity has continued to grow among Catholics. The USCCB recognized this trend, and published an online article regarding cohabitation to serve as a resource for dioceses and priests. In the article, the USCCB defines cohabitation as “living together in a sexual relationship without marriage,” and goes on to state that according to a 1995 national study, almost half of the couples who come for marriage preparation in the Catholic Church are in a cohabitating relationship. (I can imagine that this statistic has only grown since the year 1995.) By its own definition, the USCCB admits that cohabitation leads to fornication, a mortal sin and, in the very least, puts one in regular near occasion of sin. With this growing trend of cohabitation, wouldn’t it be wise for courses on marriage preparation to focus on the immorality of cohabitation and on formation of the couples approaching the Sacrament?

At the conclusion of the article, the USCCB states, “Above all, when cohabiting couples approach the church for marriage we encourage pastoral ministers to recognize this as a teachable moment.”

Unfortunately, the couples at our marriage preparation conference missed this “teachable moment.”

In the beginning of the next session on Natural Family Planning (“NFP”), the group was asked to raise their hands if they knew what NFP was all about. My fiancé and I, along with two other couples, rose our hands. This was a great opportunity to teach the young couples present the Church’s teaching on NFP, right? Wrong.

To start learning about NFP, we were shown an “informational video.” The video showcased a number of couples discussing their experiences with NFP.

This is what I (and most likely the rest of the couples) took from the video:

A number of couples from the video are quoted saying:

So obviously, by their own words, those interviewed understood NFP to be a form of contraception. Otherwise, why would they keep saying it “works?” “Works” by doing what? Preventing unwanted children.

Wait, so does the Catholic Church approve of NFP as a form of contraception? The answer is plain and simple: NO.

The regulation of births, which is an aspect of responsible fatherhood and motherhood, is objectively morally acceptable when it is pursued by the spouses without external pressure; when it is practiced not out of selfishness but for serious reasons; and with methods that conform to the objective criteria of morality…

There are serious motives, such as those arising from what are termed medical, eugenic, economic and social ‘indications,’ that can exempt for a long time, perhaps even the whole duration of the marriage, from the positive and obligatory carrying out of the act…

Father John Hardon goes on to describe each serious reason given by Pope Pius XII:

[t]he medical reasons might be that childbirth would be dangerous or that one of the parents is too ill to help in the rearing of children. Eugenic reasons might be the real likelihood of mental abnormality or serious hereditary defect in children, or mental weakness on the part of the parents. Social reasons could be the lack of housing facilities, overcrowding, the husband’s employment in a public office… And familiar economic reasons may be summarized under the head of inability to provide decently for children according to the reasonable standard of a living family wage.

The couples in the video never once explained that they were using NFP because of financial, medical or other “serious” reasons. If that were the case, it should have been alluded to given the seriousness of the issue and to clarify ambiguity. In fact, one of the reasons they were using and promoting NFP was because it was a “healthy” option, riding on the coattails of the trend of millennials to be “organic.” In other words, as the more “organic” option, NFP is just as cool and common sense as shopping at Whole Foods.

Even worse, children were never regarded with importance during the NFP class. Rather, children were seemingly regarded as a burden and a hindrance to a selfish and fun-living life. Even the speakers who led the NFP class boasted how well NFP worked because they had only one child and had been married for numerous years. It appeared that their main concern was to convince us that NFP, as a form of contraception, “worked” for them.

Have we forgotten that “a child is a gift of God, the supreme gift of marriage,” (CCC #500), and having children is the “proper mission” of married couples (CCC #2367)?

[Conjugal] love is fecund for it is not exhausted by the communion between husband and wife, but is destined to continue, raising up new lives. Marriage and conjugal love are by their nature ordained toward the begetting and educating of children. Children are really the supreme gift of marriage and contribute very substantially to the welfare of their parents.

Do we not remember that in Genesis 1:28, God says, “Be fruitful and multiply?” This clear teaching comes directly from God. In today’s modern world, children are seen as a burden, wages are low and subsequently taxes are high, but my husband and I understood and agreed from the beginning of our marriage that we would not falter on Church teaching, our faith and trust in God. It is difficult to trust in God’s plan to have children, but nevertheless, His plan is greater than what we could ever imagine. Father John Hardon eloquently describes the problems facing married couples today:

“[i]t takes complete trust in Providence to remain true to the mandate in Genesis, “increase and multiply,” when the whole tempo of modern civilization in a country like America is geared to keeping the family down to an absolute minimum; where the size of apartments and the amount of a man’s wages, and even the conditions for renting a home are such that only faith and more faith will resist the attraction of following the crowd and falling into the ways of those, like Bertrand Russell [a 20th century British socialist and pacifist], who oppose Christianity as the great enemy of self-indulgence and Christ Himself as an obstacle to the enjoyment of pleasure.”

With the Church’s endless resources and rich teachings, it seems practically impossible that someone could attend a Marriage Preparation Conference and not receive any Church teaching, but much to my dismay, it is undoubtedly possible.

In a perfect world, what should the young couples have been told that day? We should have been told with vigor and passion: “You are entering a beautiful vocation, a Sacrament worth living and dying for, and one to never take lightly or for granted. Don’t lose faith and hope in God’s plan for you and your marriages. Trust in Him with all that you have and He will never disappoint you, even in tumultuous times. Children are the supreme gift of marriage and with that comes an immense amount of responsibility. But as Saint Padre Pio would say, ‘Pray, hope and don’t worry. Worry is useless. God is merciful and will hear your prayer.’ ” 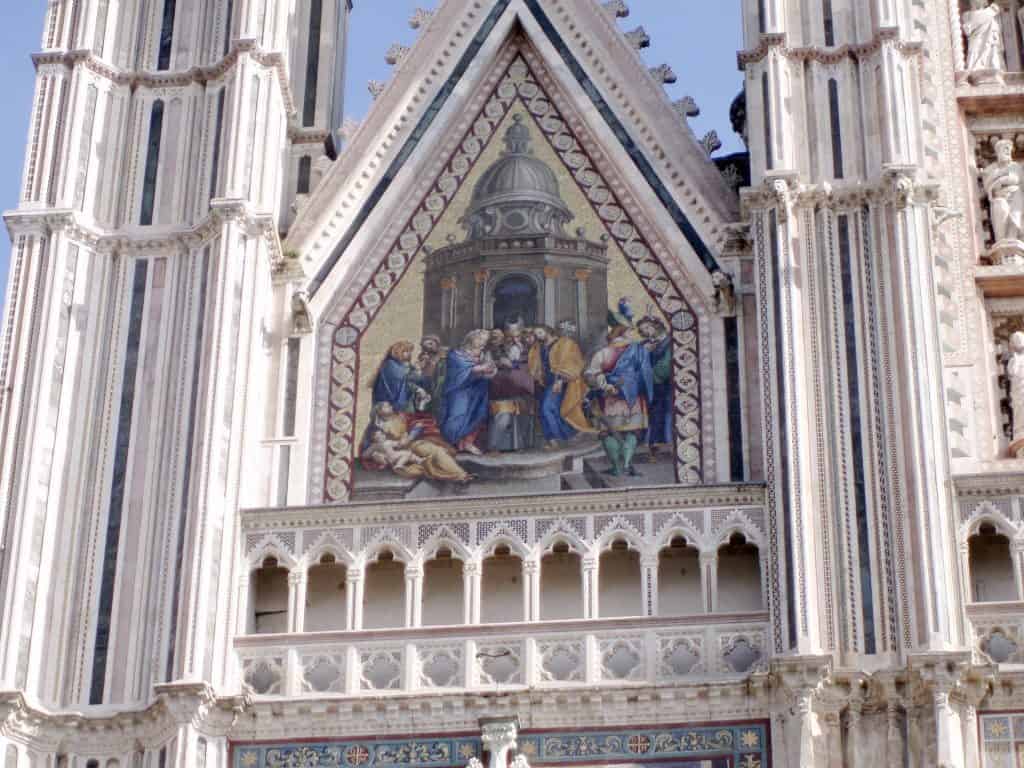 Marriage of the Virgin Mary and Saint Joseph, Cathedral of Orvieto, Italy

It is time for the laity to step up, study, read and remember why we are Catholic. Do not sit idly by and let the faith atrophy. Find the answers to your questions, read the Church Fathers, Doctors of the Church and listen to thought-provoking lectures. Our Catholic faith is so rich that you will never run out of books to read, prayers to pray, artwork to admire or Churches to visit.

I will leave you with this quote by Father John Hardon:

Catholics are asked to bear in mind that they are the salt of the earth, whose example of a selfless married love is badly needed by millions for whom marriage is anything but a life of sacrifice and obedience to the will of God.