Glamorous scenes from yesterday’s star-studded Met Gala were plastered all over the front pages today. The theme for the mega-event was “Heavenly Bodies: Fashion and the Catholic Imagination.” Several priceless artifacts from the Vatican Museum were on loan, from a diamond encrusted papal tiara, to golden copes and mitres. Along with the predictable celebrities, a VIP list of high-profile Catholic leaders were on hand to add their support to the glittering event. Even the Sistine Chapel Choir  performed.

On the surface it actually sounded like a great idea. With the help of a constellation of superstars, shine a bright spotlight on the Catholic Church’s incomparable role in the world of art and culture, and all in the heart of America’s cultural capital, New York City. Talk about publicity! What could possibly go wrong? Well, here’s one report of what went down.

And it’s not just the outfits that courted controversy. The party included a performance of “Like a Prayer” by Madonna and monk-styled backup singers, while Vogue’s social media features a video of Rihanna dancing around the exhibit to Depeche Mode’s “Personal Jesus.”

So was this event a cultural coup, a glorious moment of engagement for the Church, or was it a capitulation? Check out some of the images. It doesn’t take long to conclude that, whatever the original intentions of the organizers may have been, the Met Gala descended into a sad capitulation to a decadent, shallow pop culture that is all-too-enthusiastic about appropriating sacred images for profane use. Pop-culture icons, many of whom are widely known for their relentless advocacy on behalf of causes that the Church fiercely opposes (abortion, gay “marriage”, gender ideology, etc.) flaunted works of art that are sacred to faithful Catholics. Rihanna showed up, garishly dressed as a bishop, minus several feet of fabric to reveal plenty of skin and cleavage. (Cardinal Dolan joked that she borrowed the mitre from him.)

Catholic art, of course, has often depicted the human body. So some might ask, “What’s the difference between last night’s revealing, religious-themed fashion procession and the Catholic Church’s ringing endorsement of sacred art that highlights the human body?” Love is love. Beauty is beauty. Right? There is, in fact, a critical distinction. Sacred art does indeed highlight the human body, but always within the context of man’s ultimate redemption through Christ and his dignity as being made in God’s image. The nude body depicted in sacred art ultimately speaks a theological language about its final redemption from sin through Christ’s passion, death and resurrection. Sacred art is never cut off from the reality of sin and Christ’s singular role in saving us from it. The body is sacred, and those remaining faithful to Christ will rise gloriously, body and soul, at the end of the world. 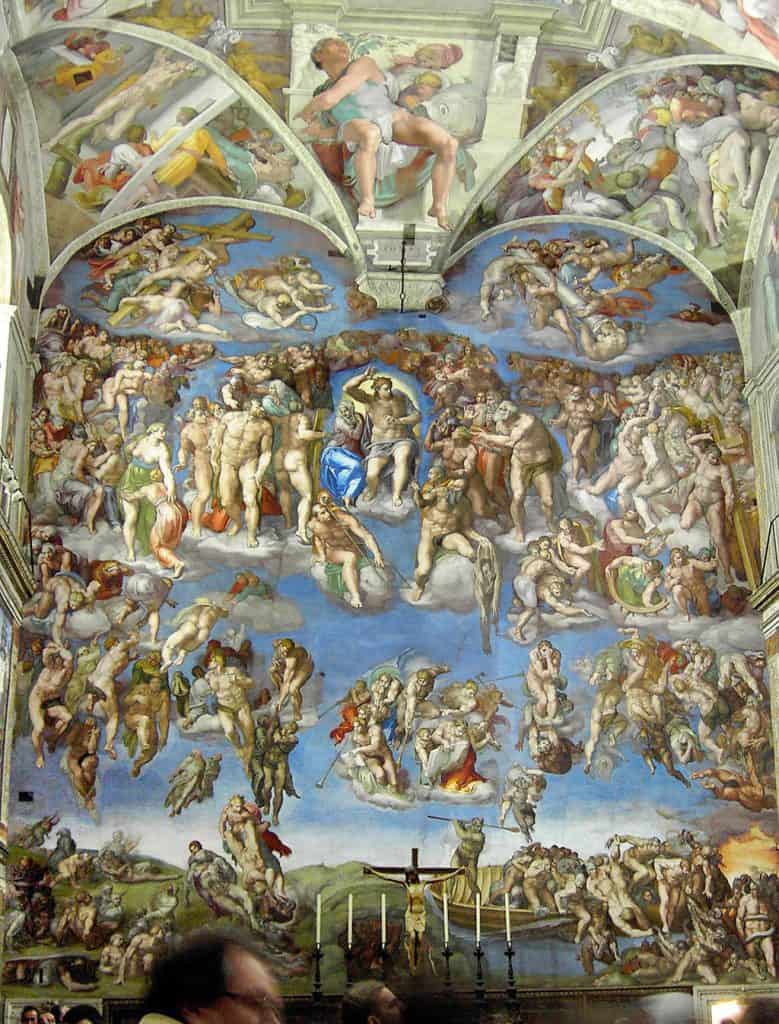 In his Address to Artists, Pope Benedict XVI warns of a deceptive and seductive simulacrum of beauty that harms rather than elevates the soul. This destructive “beauty” turns man in on himself, and views the other as an object to be possessed, manipulated and conquered. In this description, it’s easy see the connection to last night’s event.

Too often, though, the beauty that is thrust upon us is illusory and deceitful, superficial and blinding, leaving the onlooker dazed; instead of bringing him out of himself and opening him up to horizons of true freedom as it draws him aloft, it imprisons him within himself and further enslaves him, depriving him of hope and joy. It is a seductive but hypocritical beauty that rekindles desire, the will to power, to possess, and to dominate others, it is a beauty which soon turns into its opposite, taking on the guise of indecency, transgression or gratuitous provocation.

What makes last night’s fashion show all the more galling is that the “gratuitous provocation” appeared under the veneer of revered sacred images.

Despite the ringing reviews and VIP list, the Met Gala was not a success from a Catholic point of view. On paper, it sounded good. But in practice, it was a disaster. One can perhaps distinguish between what organizers may have intended, and how individuals chose to dress for the event. But with the endless flow of photo ops, that distinction really doesn’t matter a whole lot. Everything blends together. The gala showed just how eager many in the Church are to curry favor with, and fawn over, an empty pop-culture that is intractably hostile to what the Church holds sacred and defends: life, the family, and human sexuality.

Pop-culture icons, from Rhianna to Madonna, were happy to flaunt the sacred within the atmosphere of the profane and banal, and all in the presence of giddy Church officials. The backlash we’ve seen today, driven in large part by the laity, offers a degree of consolation.