It’s easy to forget as you stand on the lakeshore in high summer under a sun like a Klieg light, but Milwaukee is a place with plenty of cloud and damp. This is a winter city. And so it is also a city of places to hide: crannies and burrows, the Bierstube and the basement rec room.

And the movie palace.

Like a lot of great places in this city, the Oriental Theater on Farwell Avenue is funky in a good way. It’s also a tad outlandish. There are those minarets, for one thing — we aren’t doing Islamic prayer towers on cinemas much anymore. But the Oriental has stood here since 1927, and a little exotica was just the ticket for the celluloid collar set.

Make that a lot of exotica. You step in and face a ticket kiosk bristling with slender gold columns and tarted out in colored tiles. A Midwestern face peers out reassuringly from East Indian windows under a tasseled curtain. One, please.

You move forward into a fog of popcorn perfume. You pass under custom-made stained glass chandeliers that are supposed to recall Bombay but look more like headdresses for Ming the Merciless. Turn around in the lobby, with its ceilings receding into the darkness high above, and gawk at the false balconies backed with murals of Shangri-La. More columns. More louche draperies. More gold paint. Everything is forked or fringed or curlicued. White elephants recline along the concessions counter. You expect Theda Bara to come up and order a Coke.

Head toward the rear along the squishy carpet and meet eight black lions, like those on the pillars of Ashoka, arrayed on the stairs to the balcony. The staff will probably let you sneak up there and take a look. Do it.

Push through the balcony doors into the main theater. Unbelievable. The hall is vast. Six golden buddhas, larger than life, assume the lotus position along the walls. Their faces are lit from below, for that cub-scout-at-a-campfire effect, and — hide your eyes, Asian Studies professors — each statue’s forehead is studded with a glowing red light, the Hollywood version of a bodhisattva’s third eye. How this jibes with the minarets is not explained.

Below the silver screen is a white Kimball pipe organ, billed as the third largest in the world. This is a city of human treasures, so naturally there is a man in his 90s, Bill Gans, who plays this quavering, warbling wonder before the main show on Friday and Saturday nights. Look up while he plays and you can discern a broad frescoed ceiling in the weird purple light.

There were movie palaces all over the country in Calvin Coolidge’s time. Kimball organs, too. So what makes this place Milwaukee?

For one thing, the fact that it’s here. There are other cinemas of the silent era sprinkled around America, but just a handful. And as much as we thank the workers who have maintained the building (and Landmark, the chain that has owned the house for years), I suspect the real reason this white elephant has made it to the new millennium is a sort of native Milwaukee acedia. Call it Slush Mind. It’s a familiar, snow-blanketed torpor that makes us disinclined to change too much or too quickly. In Milwaukee, as the clouds settle upon us, we settle in the darkness into a seat at the Oriental. And we like it just fine.

Then: a pop on the sound system, the screen glows with light, and we’re off. 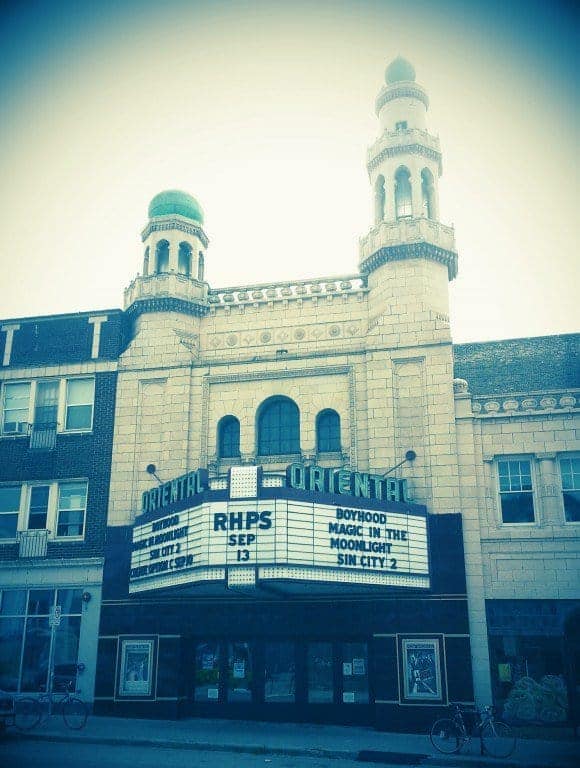 * Featured image of the Oriental’s interior is from Urban Milwaukee.