It’s been a while since I posted updates on the restoration work at Saint Stanislaus. From the beginning of the restoration initiative, I’ve tried to document all of the stages of the work in order to give readers a true sense of the project’s monumental scope.

When I first started attending Saint Stanislaus seven years ago, none of this work had gotten underway. The church was dimly lit. The floors were covered in well-worn, purple carpet. The walls from floor to ceiling were white-washed (beige-washed actually). The liturgy itself, the traditional Latin Mass, was beautiful, but the interior was so scarred from its disastrous 1960s renovation that it was sometimes hard not to get distracted by it. What were they thinking when they did X…?

Remember those awful modern windows? The broken-glass-shard-monstrosities from the ’60s replaced the original stained-glass windows depicting saints. To put it mildly, the church needed a lot of attention. And attention is what it got with the arrival of a visionary French pastor named Canon Jayr. 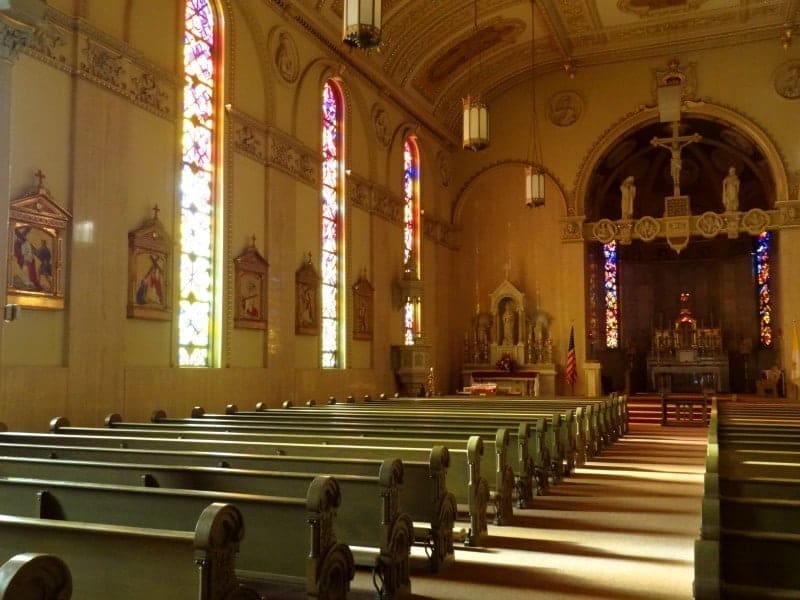 A quick rundown of some restoration highlights: the original high altar was restored. (Ciao, table-altar!) The two sanctuary windows flanking the altar were replaced with stunning color drenched stained-glass windows depicting the Virgin Mary and, naturally, Saint Stanislaus. The drab purple carpet was removed, never to be seen again, and an elegant tile flooring was installed throughout the church interior. Concrete that was poured into the sanctuary by the tons in the ’60s to level the floor was broken up and removed piece by heavy piece. A Communion rail, made from brilliant white Carrara marble and green onyx, was commissioned in Italy, shipped over and installed. The original, massive marble baptismal font was taken out from hiding and placed at the church’s entry in the nave. And, one-by-one, the old windows are being replaced with stunning stained-glass that closely match the original 19th century windows.

One of the most exciting stages, however, had to be the extraordinary painting done by Conrad Schmitt Studios that brought out the exquisite details of the apse, rood screen, walls and ceiling of the entire church. Today, brilliant bursts of color and warm light have replaced the ubiquitous and soporific beige. The parish transformation at Saint Stanislaus is unlike any other in the area. 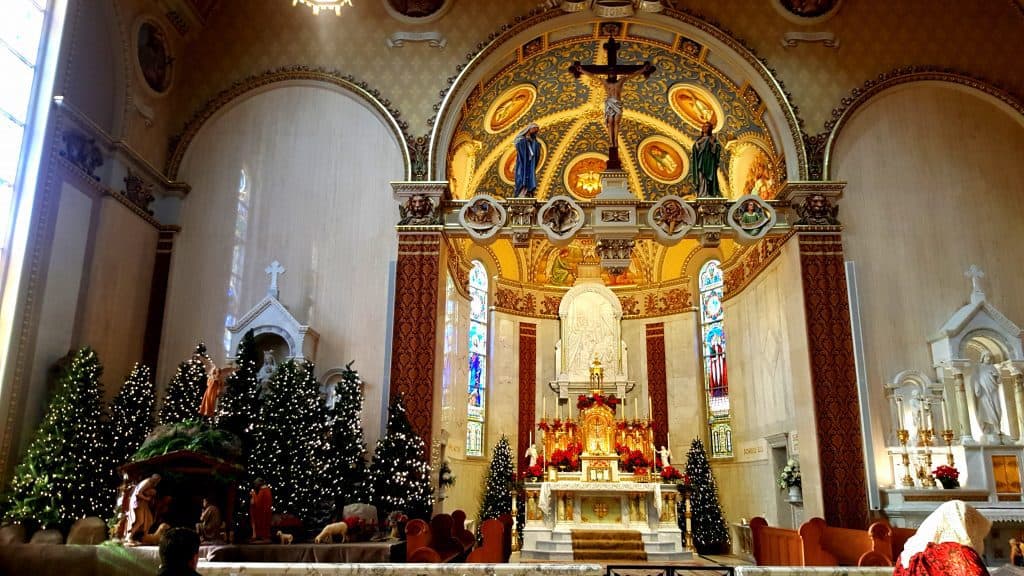 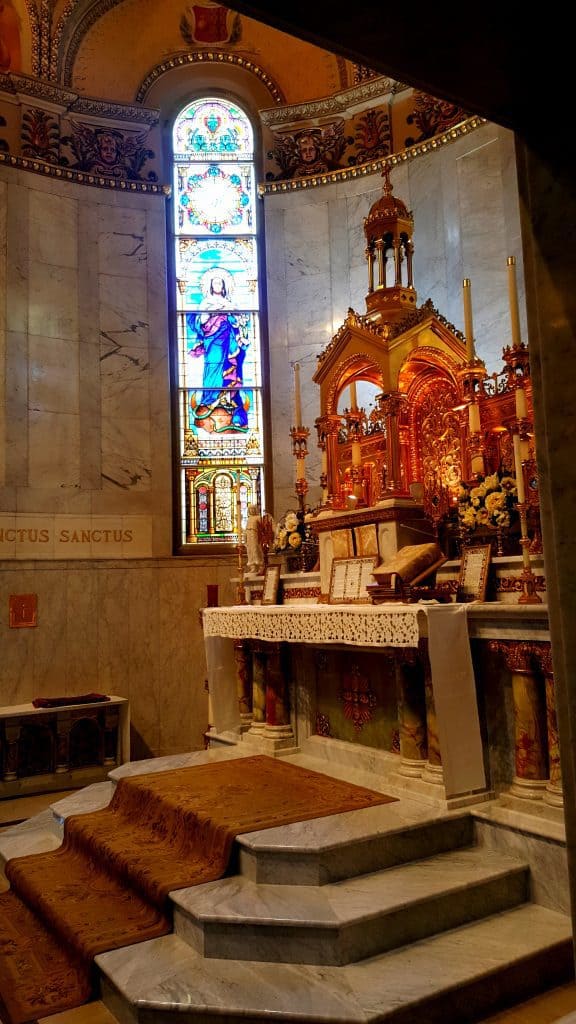 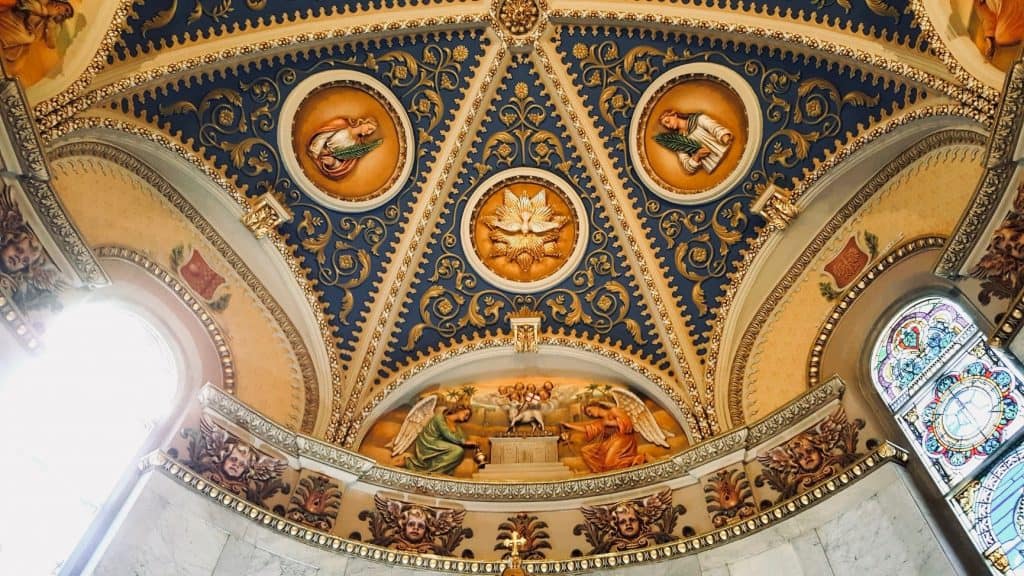 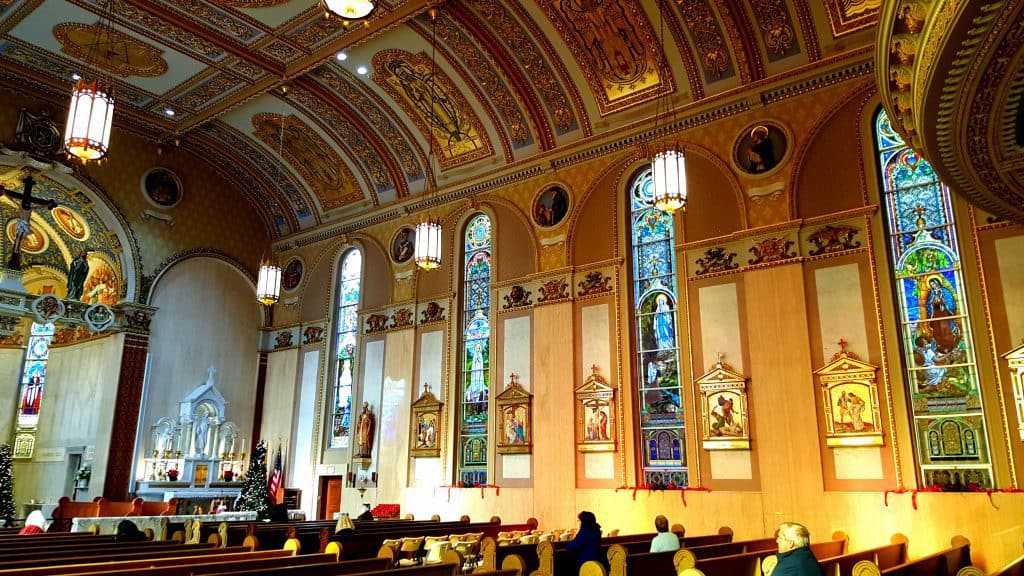 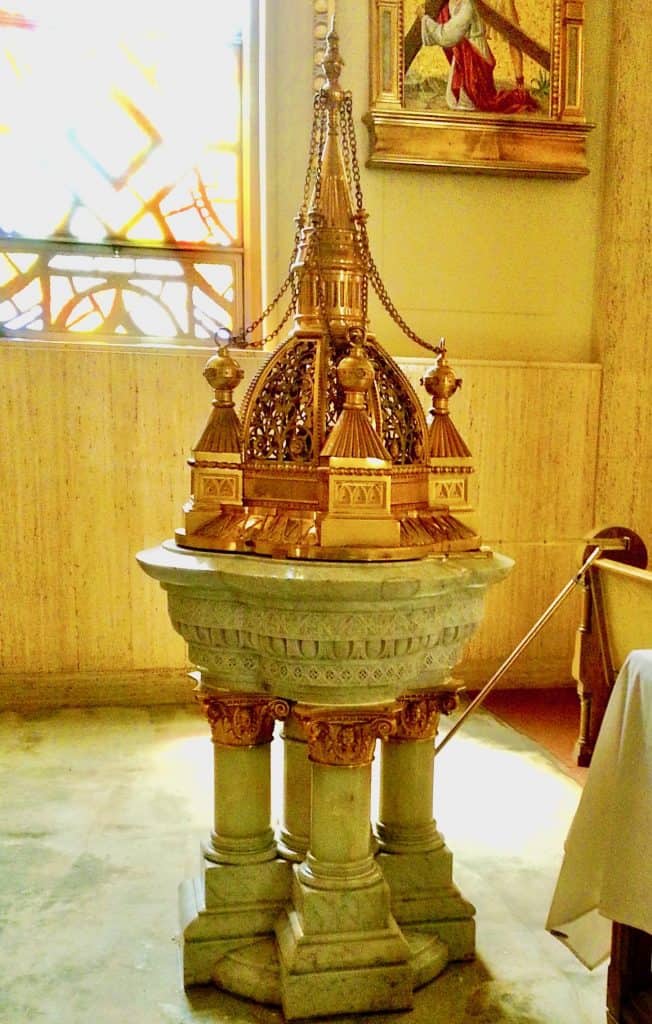 Most recently, parishioners have seen the long-overdue return of a beautiful bas-relief in the sanctuary, directly above the altar. It replaces the original, which was destroyed (you guessed it) in the ’60s. The large plaster bas-relief shows a famous scene from the life of the parish’s patron, Saint Stanislaus. The short version of the story: The Polish Bishop summoned a dead man named Piotr to argue his case (involving a land deal) to the king. Of course, with a feat like that, there was little doubt that good ole’ Stanislaus would win the day in court. In the scene shown here, Piotr’s skeletal arm points to the stupefied king on behalf of Bishop Stanislaus, who stands in the center in full episcopal regalia. 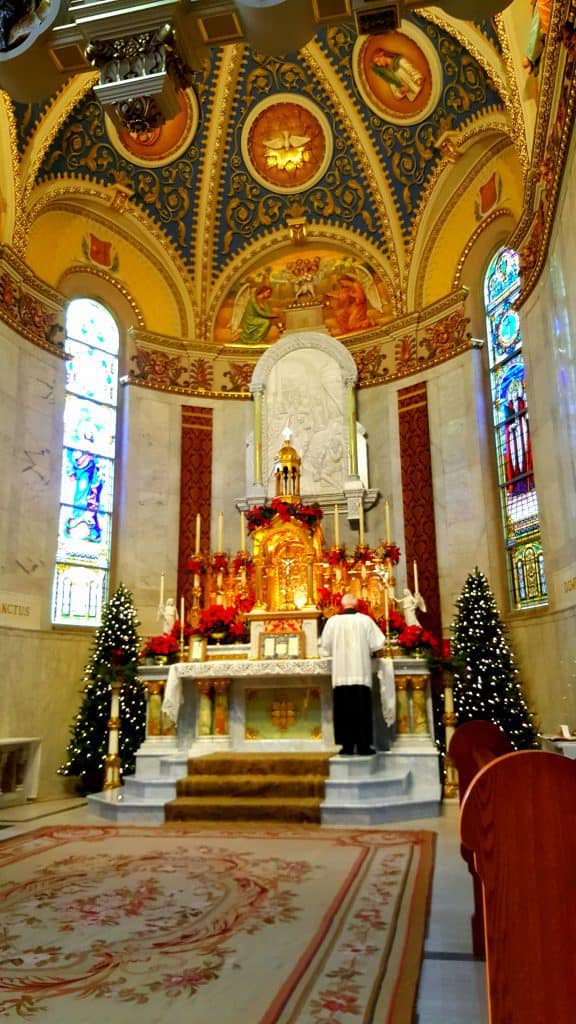 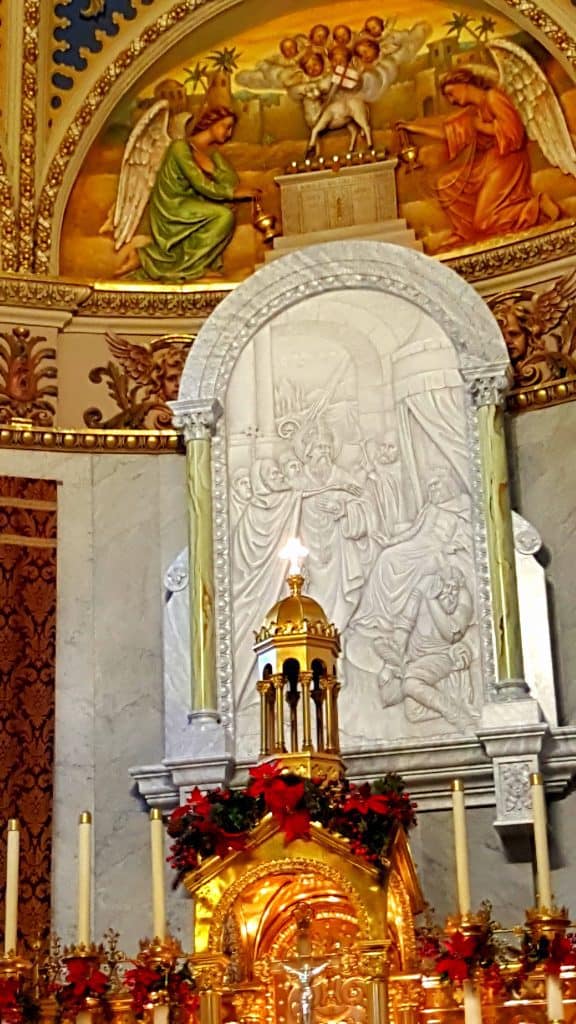 Over the past seven years, as the restoration rolls along, the parish has steadily grown. When I first started attending Mass here, I was part of a consistent, steady flock in weekly attendance. The numbers weren’t really large, but we were faithful, determined and dedicated to tradition and to this special oratory. I remember talking to friends, trying to convince them to come to the traditional Mass. They would often give voice to deep frustrations and disappointments with the sorry state of the liturgy at most parishes–frustrations that I know are widely held. Ok, well, we have an alternative, so do something about it. It took a while to learn the traditional liturgical ropes and the culture of the Latin Mass, but today all are regular parishioners at Saint Stanislaus, navigating their 1962 missals with ease. They, in turn, have reached out to others, and new members keep pouring in. Why the draw?

Since the early twentieth century, Western society has been in the grip of a culture of repudiation – rejecting one by one the institutions, offices, traditions and achievements of the past, while having often little but sentimental emptiness with which to replace them.

This “culture of repudiation” certainly applies to many areas in the life of the Church over the past several decades, including the liturgy. Our increasingly trend-obsessed, banal, and iconoclastic culture, one that rejects form, logos and order, has left many people desperately seeking something deeper. What is that “something deeper”? Reminders of permanence and stability, lasting beauty, and transcendence. They find all this at Saint Stanislaus, first in a liturgical and sacramental life rooted in ancient rites and ritual, and second, in the numerous manifestations of awe-inspiring beauty in which liturgy and sacrament unfold. It’s not about repudiating our past and our traditions; rather, it’s about recovering and restoring them to their proper place. 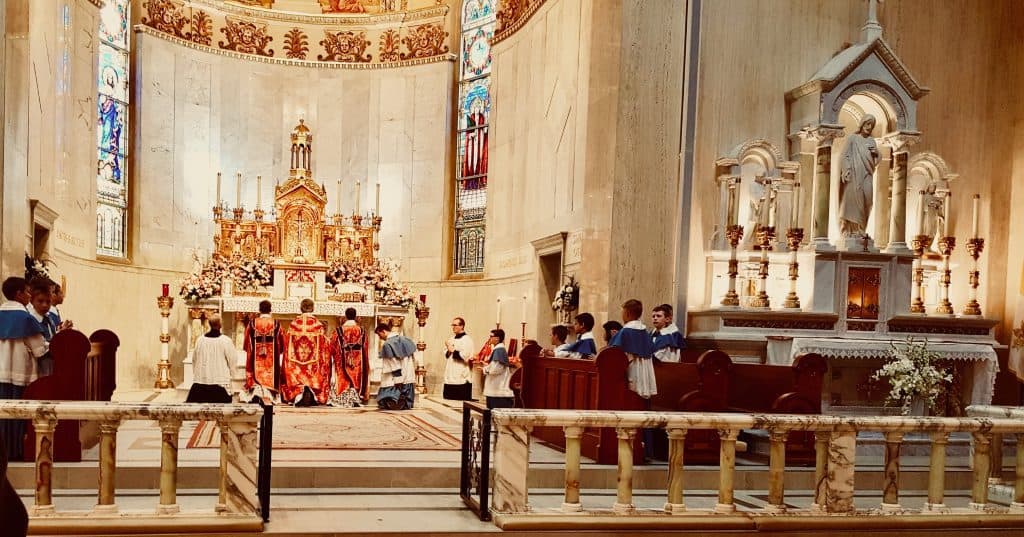