Worship, forms of worship, such as bowing the knee, taking off the shoes, keeping silence, a prescribed dress, and the like, are considered as necessary for a due approach to God. ~ Cardinal John Henry Newman

In his sermon, Reverence in Worship, Cardinal John Henry Newman begins by bringing us back to the Old Testament to present two opposing dispositions before God. One is that of Saul, the king, and the other is Samuel, the prophet. Saul was a “reprobate king” who “behaved himself in an unseemly, wild way” in God’s presence. Not so with Samuel, the “first of the Prophets.” Newman explains, “The more he [Samuel] acquainted himself with God, the greater would be his awe and holy fear.” Today in the Church, Newman continues, there are Catholics who follow the noble example of Samuel, who interiorly and exteriorly humble themselves before God, and there are those who follow in the “unseemly” footsteps of Saul, and behave shamefully in the presence of God while in church.

Newman is careful to explain that authentic reverence before God is not to be confused with phony ostentation and sanctimony. He leaves the Old Testament and brings us to the New Testament and Christ’s parable of the publican and the Pharisee. As you will recall, the latter makes a grand, loquacious display of his religiosity, thanking God for not making him like the “sinner” standing in the back of the temple. For his part, the publican, not even raising his eyes to God, makes a humble plea from the depths of his heart. He recognizes his condition as a sinner and begs mercy from God. Christ tells us that publican is forgiven, while the Pharisee is not. Says Newman, “Though grave and solemn, he [the Pharisee] was not reverent; he spoke in a haughty, proud way, and made a long sentence, thanking God that he was not as other men are and despising the publican.” The publican had genuine faith, “his whole conduct humble and reverent; he felt that God was in heaven, he upon earth, God All-holy and Almighty, and he a poor sinner.”

Jacques Joseph Tissot’s The Pharisee and the Publican

Is it fair to say that a re-examination of the importance of reverence in the life of our parishes is in order? It’s not a minor issue. A lack of reverence is a symptom of a more serious sickness: a lack of faith. Newman tells us,

Hence, even the heathen religions have ever considered faith and reverence identical. To believe, and not to revere, to worship familiarly, and at one’s ease, is an anomaly and a prodigy unknown even to false religions, to say nothing of the true one.

Our culture places a premium on familiarity and egalitarianism and, for the past forty years and counting, what we’ve seen in the Church has been a systematic dismantling of barriers and symbols that were intended to inspire reverence and strengthen faith. People needed to “feel” more welcome, we were told, so churches started looking less like actual churches and more like bland gathering halls. The liturgical language, sacred music, art, how we dress, everything became more common, more familiar and more comfortable, and the consequences were devastating. One can only speculate what Blessed Newman, writing over one-hundred years ago, would say in 2015.

Everyone ought to come into the Church as the publican did, to say in his heart, “Lord, I am not worthy to enter this sacred space; my only plea for coming is the merits of Jesus Christ, my Savior.” When, then, a man enters a church, as many do, carelessly and familiarly, thinking of himself, not of God, sits down coldly and at his ease, either does not say a prayer at all, or merely hides his face for form’s sake, sitting all the while, not standing or kneeling; then looks about to see who is in the Church, and who is not, and makes himself easy and comfortable in his seat, and uses the kneeler for no other purpose than to put his feet upon; in short, comes to Church as a place, not of meeting God and His Holy Angels, but of seeing what is to be seen with the bodily eyes. . . I mean when a man acts in all respects as if he was at home, and not in God’s house–all I can say is, that he ventures to do in God’s presence what neither Cherubim nor Seraphim venture to do, for they will veil their faces, and as if not daring to address God, praise Him to each other, in few words, and those continually repeated, saying Holy, holy, holy, Lord God of Sabaoth. 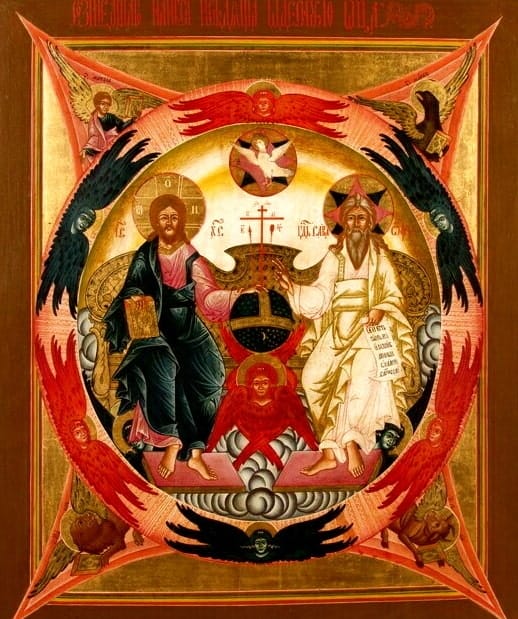 Icon of Seraphim worshiping the Trinity