More often than not, students will complain about having to endure at least one course of Latin.  In Amercian high schools, and I dare say seminaries, the common complaint was in verse:

Latin is a dead language,

As dead as can be,

It killed off the Romans,

And now it’s killing me.

But really, can anyone be content with simply reading a translation?  No matter how beautiful is such a phrase as: Late have I loved you, beauty so ancient and so new: late have I loved you . . .  You called and cried out loud, and shattered my deafness.  You were radiant and resplendent, you put to flight my blindness.  You touched me, and I am set on fire to attain the peace which is yours. 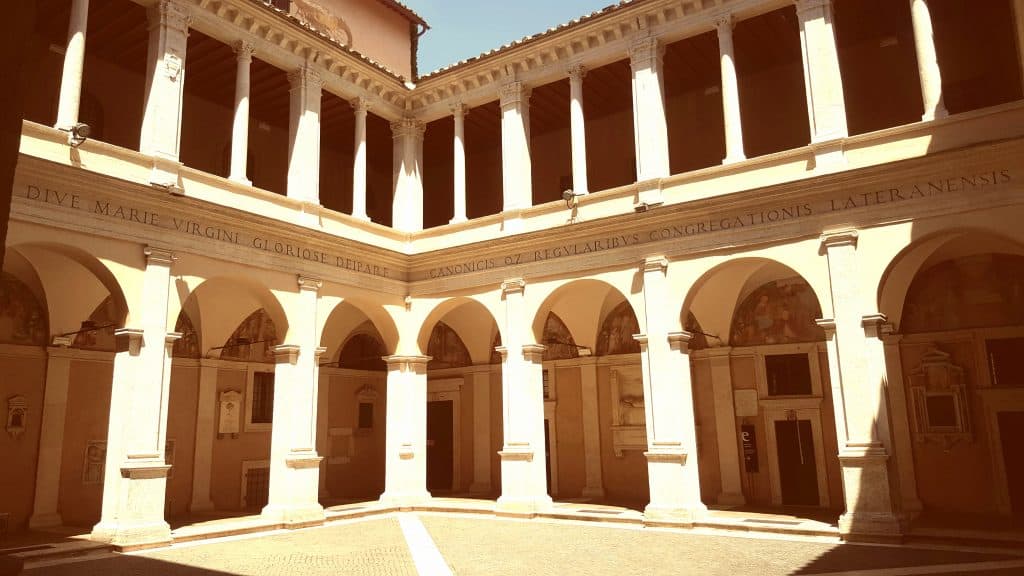 When I studied in Rome, my professors told me, you must secondarily breathe Romanità or Roman style, but primarily imbibe, Latinitas!   In the Eternal City, can we not see the Tradition of the Latin language written and inscribed all over churches, monuments, palaces and places of importance?  Whereas Italian is written on store fronts, pizza shops, bakeries and street signs, what language was the writ of most books in the Eternal city? For more than 1,500 years, it was Latin.  And most importantly, Latin is still the official language of the Roman Catholic Church, and the liturgical language to be preserved in the Latin Rites according to Sacrosanctum Concilium of the Second Vatican Council.

Is Latin, as some would say, merely a keepsake, or a memento one brings out during solemn moments? Or rather is it living?  I would dare say, and many may object, but Latin is a living language, and yet at the same time, unchanging.  Inasmuch as it is read, or wherever it is a language of prayer, of ritual, it lives. Latin has been hallowed to portray the transcendent, and at the same time, in its static state, as a classical and unchanging language, Latin literature proves that in reading it one can understand an objective sense to words and a reference of context that remain perennial.

In Augustine’s Confessions, the term tolle et lege, has appeared like a hallmark of conversion and of lectio divina—cannot one see that it would lose its analogies and sobriety when translated to simply, “take and read”?  When Augustine says pulchritudo, does not one see beauty as ever so present, so new, ideal and transcendent, immovable, ineffable, eternal—all in one term?  To read or even to recite the actual words of Augustine, in hearing his very prose said aloud, one participates more closely in what he was thinking, feeling, and relating: enamoured by the beauty which he was experiencing with the eyes of the soul.

And what of the composers of Gregorian Chant?  Why did they preserve the Alleluia in Hebrew, or the Kyrie Eleison in Greek? Amen remains untranslated. Was there more meaning than simply saying “Praise the Lord” or “Lord Have Mercy,” or even, “I believe,” in the vernacular?  These sacred melodies reflect a theological truth established since time immemorial whose beauty we can participate in with a depth that is only expressed most fittingly in Hebrew, Greek, or Latin, the languages of the original context.  As St. Bruno, gazed upon the valley above Grenoble where he eventually settled as a hermit, he did not say in French, “C’est Beau.” No! He said, “O BONITAS.”  Goodness, supreme goodness that I see through the beauty of Creation, all is Shadow except for the Good! O BONITAS!

Breathing the same air and living the wisdom of the ancients is so clearly present at the Roman Canon of the Liturgy, that we are praying in the same cultural and religious context as Gelasius and Gregory the Great, a context relevant to our modern spiritual struggle.  This experience can teach us about man’s own relation to the Living Word, an Eternal Word who was made flesh, and who exclaimed on the Cross, recorded for us in a mysterious language, prayers divinely inspired by the Holy Spirit in an ancient semitic tongue flowingly molded and transliterated against a backdrop of koine Greek:  in Hebrew Eli Eli Lamah ‘zabthani ; in Aramaic, Elahi Elahi Lemma Sebaqthani.