The linchpin of revolution is total war on the past. In Russell Kirk’s The Conservative Mind: From Burke to Eliot, he lists the hallmarks of the sort of radicalism that emerged after 1790 and the French Revolution. One is “Contempt for tradition.” He explains:

Reason, impulse, and materialistic determinism are severally preferred as guides to social welfare, trustier than the wisdom of our ancestors. Formal religion is rejected and various ideologies are presented as substitutes.

Every revolution in the modern era was fueled by this objective. Erase the past. Erase memory. Erase culture. The Revolution in France, unlike the American War for Independence, saw an all-out assault on traditional religion. Notre-Dame Cathedral was looted, desecrated and turned into a “Temple of Reason.” Persecution of religion and iconoclasm became official policy of those spearheading the revolution in France. Hundreds of churches were plundered, and thousands of priests, nuns and laity were martyred in the name of “liberty, equality and fraternity.” Even the tombs of saints and French royalty were not spared the fury. This was total war on the past. Over the centuries, casual observers have sought to tie the two events in France and the United States together. Both espoused “liberty” and the beginning of a new system of governance. Even in the newly minted United States, many were initially supportive of what they heard was taking place in France…until they learned what was actually happening.

In a collection of his writings, I came across a 1794 letter written by Alexander Hamilton entitled “A Memorandum on the French Revolution.” In it, he offers a remarkable snapshot of how the Reign of Terror impacted one of the most influential of the American founders. On the violent flare-ups erupting in France, Hamilton writes of “one volcano succeeding another, the last still more dreadful than the former, spreading ruin and devastation far and wide . . . subverting the foundation of . . . order, morality and religion.”

Hamilton goes on to describe,

. . . a state of things the most cruel sanguinary and violent that ever stained the annals of mankind, a state of things which annihilates the foundations of social order and true liberty, confounds all moral distinctions and substitutes to the mild & beneficent religion of the Gospel a gloomy persecuting and desolating atheism.

(Alexander Hamilton: Writings, edited by Joanne B. Freeman, The Library of America)

This hardly sounds like a ringing endorsement of French “liberty.” Alexander Hamilton cherished tradition, religion, order and morality, and he saw them as indispensable for a healthy society. Read George Washington’s Farewell Address (largely written by Hamilton) to understand the indispensable role of religion and morality in the life of our nation.

Returning to Kirk, he also offers a list of general principles associated with conservative-minded thinkers. At the top of the list is a reverence for the past. “Conservatives respect the wisdom of their ancestors . . . they are dubious of wholesale alteration. They think society is a spiritual reality, possessing eternal life, but a delicate constitution.”

These principles were firmly embraced by Hamilton, and firmly rejected by the revolutionaries in France. 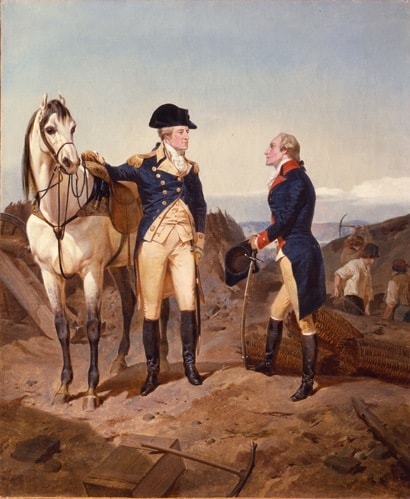 So we must ask: What would Hamilton say about the state of affairs today in this country, which he worked so hard, with musket and quill, to build? Traditional morality and Christianity are being undermined and redefined by a hostile pop culture, media, political and judicial junta with a revolutionary élan that would have impressed Robespierre himself. Under the auspices of “equality” and “freedom,” marriage the definition of the sexes, and even life in its earliest stages are under constant assault by the left.

In a dissent from a Supreme Court ruling on emergency contraceptives, Justice Samuel Alito cautioned, “Those who value religious freedom have cause for great concern.” More and more, aggressive court rulings and edicts via executive fiat are doing the old work of the guillotine here in the United States. Can there be any doubt that the traditional teachings of Christianity, especially those pertaining to the moral life, are coming under greater assault and ridicule by a secular alliance between the political, media, entertainment and academic classes? Speaking at Westminster Hall in 2010, Pope Benedict XVI sounded the alarm on this very concern.

In this light, I cannot but voice my concern at the increasing marginalization of religion, particularly of Christianity, that is taking place in some quarters, even in nations that place a great emphasis on tolerance. There are those who would advocate that the voice of religion be silenced, or at least relegated to the purely private sphere. . . . And there are those who argue–paradoxically with the intention of eliminating discrimination–that Christians in public roles should be required at times to act against their conscience.

(Pope Benedict XVI, A Reason Open to God: On Universities, Education and Culture)

Since this speech was given, the militant forces of secularism in the West have only grown bolder. More recently and in our own nation, Miami’s Archbishop Thomas Wenski warned,

. . . in this country and in other liberal democracies, people of faith are being increasingly subjected to a soft despotism in which ridicule, ostracism, and denial of employment opportunities for advancement are being used to marginalize us. We see this when butchers and bakers and candlestick-makers are being put into the legal dock for refusing to renounce their religious beliefs.

A new religious intolerance is being established in our country. We see this when Christian pastors are stalked and threatened for being “Christian” pastors, when social scientists are expelled from universities for having turned up “politically incorrect” facts, when charitable organizations and confessional schools are harassed if they take seriously their faith’s moral precepts and require their employees to support their missions. We see this in the refusal of the Administration to accommodate Catholic institutions and businesses because of their conscientious objection to subsidizing contraception and abortions.

If the Jacobins of our own day overseeing this new reign of terror are going to continue down the path of persecution of traditional-minded Christians, they should at least not be allowed to claim the mantle of the Founding Fathers of our nation. They should come clean about who their true revolutionary heroes are.

Were he alive today, Alexander Hamilton would certainly detect the gathering clouds of an approaching “desolating atheism” and call on America to return to its first principles.