A while back I visited a Catholic high school.  In one class, apologetics, the teacher asked me to go to the front of room and defend Catholicism from the students for 50 or so minutes.  That took me a little off guard.  But OK, I’m not a shy person.

The first question was this: how can you support an institution that has been responsible for so much evil (like the Inquisition, the Crusades, bigotry, homophobia, etc.)?  I gave the class four responses:

2. You have to judge an institution by what is at the heart of that institution.  If the heart of the institution is good, then, when its members do bad things, their actions are really outside the institution because they run contrary to its core identity.  Take a hospital.  A hospital is good because it has a good mission.  When its doctors are negligent they are acting against the hospital.  They undermine the heart of its identity.  So you should be against those doctors, not against hospitals and their core mission.  The same goes for the Church.  The heart of the Church is faith, hope, and love.  Clearly, murder and bigotry don’t make the cut to be part of its core mission.  So when Catholics murder and are bigots, they are not doing the will of the Church.  They are undermining it.  So blame them for their actions, not Catholicism.

3. The Catholic Church is responsible for an enormous amount of good.  The Church invented hospitals, universities, and charitable institutions (and I don’t think this is much of an exaggeration).  The Church also does more charitable and social justice work than any other institution that the world has ever seen.

4. Finally, the best response.  I believe that the Church provides us with revelation–with the most important truths in life.  And I also believe that the Church gives us contact with God, and siphons off to us his forgiveness.  It gives us a shot at eternal happiness.  If you believe these things, then being against the Church is absurd.  How can you be against an institution that gives you all of the only things that matter in life? 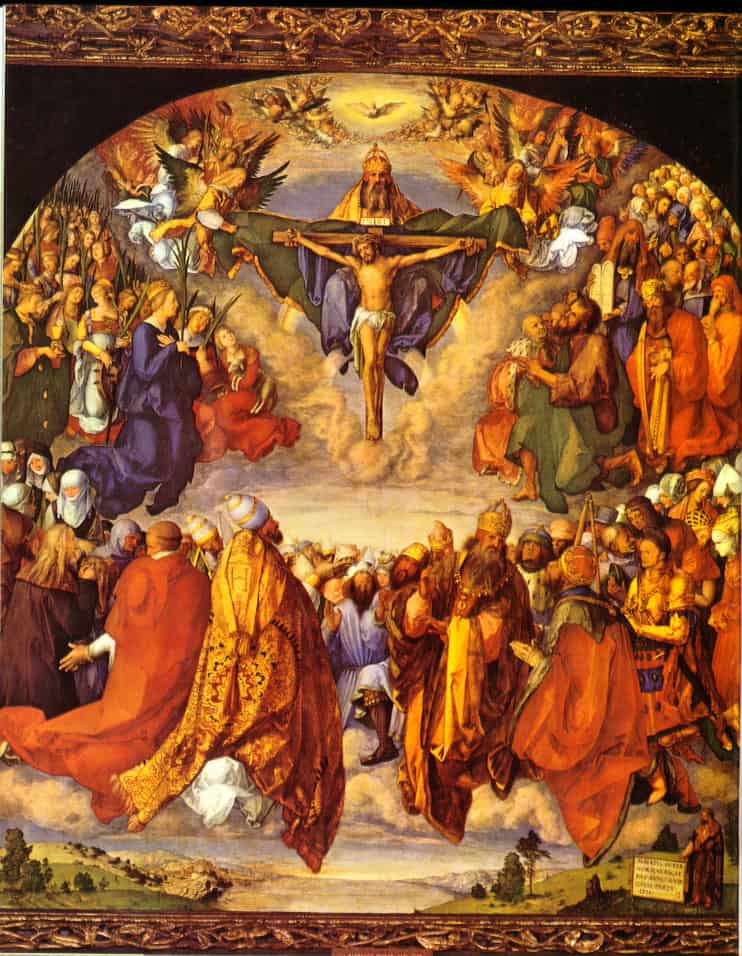 The Holy Trinity with the Communion of Saints