In today’s Gospel, the disciples are together again. Jesus is not there, but a lot of them sense His presence. The Risen Christ has been seen more than once since Easter morning, and many of the apostles know that something extraordinary has happened. Some saw Jesus themselves. Others believed the testimony of those who had seen Him.

But there is always that voice that says, “Oh, come on! Dead people stay dead. To believe otherwise is madness.” It’s a voice that rises up in every one of us. And the personification of that voice is Thomas.

So today, to help doubting Thomas, Jesus visits his disciples again. Our Lord is constantly stooping down to scoop up the stupid. He came down to our level in the dazzling signs of Exodus. He did it in the Incarnation and the Transfiguration. And here He does it again. As if it weren’t enough to rise in glory from the grave, and to reveal himself to Mary Magdalene and the men on the road to Emmaus, here comes Jesus into a stuffy room filled with nervous disciples.

He came into the room through a barrier of fear and bolted doors: Jesus came, although the doors were locked, and stood in their midst and said, “Peace be with you.” Peace, of course, is just what the Apostles lacked.

In order to understand Thomas, and in order to experience the transformation that he had, you have to know that believing in Jesus means more than being convinced of certain facts. It’s not enough to say, “Jesus is the Son of God who has risen from the dead.” Whatever you may have heard from born-again preachers, faith is not just signing on to a series of declarations. Even fallen angels — even the denizens of hell — know the facts of Jesus’s resurrection. They know what happened. But they won’t believe; they don’t have faith. And so they cannot be saved.

Thomas denied the fact of the Resurrection, but more importantly than that, he refused to believe. He refused to admit into his heart the possibility that the Lord could have done this great thing for him. And so he kept the doors locked. But Jesus was not deterred.

This joy and this peace do not exist in the fallen angels. In our fallen state, we lack them, too. Peace comes to us as a gift from the Lord himself. So Jesus says to his apostles: Peace be with you. He gave them what they needed.

This hole jabbed by a Roman lance through the ribs to the heart has dense, intense meaning. The great mystics of the Church, geniuses of prayer, constantly return to it. “He has washed us in the tide flowing from His wounded side,” the old hymn says. Thomas opened that hole with his fingers. He examined Jesus’s ruptured flesh and saw the sacred heart beating within it. This is the heart which was opened on the Cross.

It’s a gross and grubby image, perhaps. But this is the image Christ asks us to contemplate today, without squirming.

Not only Thomas, but also John, standing beneath the Cross, and even the centurion whose lance opened up this passage — all of these men saw the pierced side of Jesus and were exposed to the peace that pours from His heart. Feeling a wave of peace wash over him, the centurion made his declaration of faith right there on the spot. “Surely, this was the Son of God!”

Learn from me, for I am gentle and humble of heart, says the Lord, and you will find rest for your souls. (Matthew 11:29).

In the heart of Jesus, we find peace. Jesus’s heart heals our hearts. And we are transformed from skeptics to believers. That is why that early community of believers in Jerusalem was of one heart and mind, as we heard in the first reading: because their heart was Christ’s heart. They lived in peace, and peace is the gift of God. This is the peace that flows from Jesus’s side, and they were awash in it. 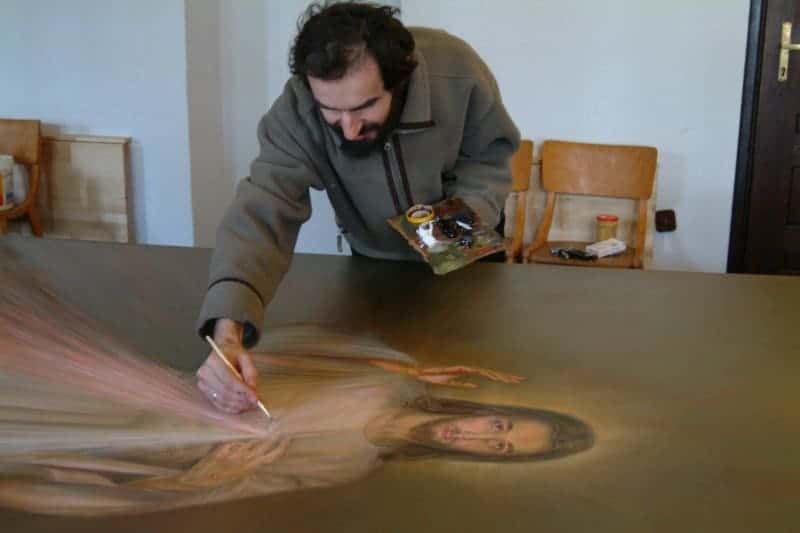 The artist Janusz Wacław Antosz finishes a new copy of the Divine Mercy image in Warsaw in 2008.

In light of the Gospel, there is nothing strange about the revelation received just before the Second World War by Faustyna Kowalska, a Polish nun. Today is Divine Mercy Sunday. We all know the image of Divine Mercy that came to Faustyna one night in a vision and has since gone ’round the world in thousands of copies and millions of little colored cards. Faustyna saw Jesus risen from the dead — in a white robe against a dark and uncertain background. Then she noticed something flowing from His side; from His heart. Jesus asked Faustyna to remember this image. He wanted her to find an artist who would paint Him just as she had seen Him, and to write beneath the image this motto: Jesus, I trust in you.

He gave her this image so she could give it to us.

The Lord gave this image when the world was on the edge of some of the darkest events of history. Through the horror of the 1940s, through the brutal totalitarian repression that followed, the Church gazed at this picture of light. And at its center, staring at us like an eye, is the almond-shaped opening in the side of Christ. We look at this image, and, like Thomas, we are opened. Awash in peace, defenseless, we make our declaration of faith.

The original image of Divine Mercy painted in the presence of Saint Faustyna by Eugene Kazimirowski in Vilnius in 1934. This image is still in Vilnius, in a small church recently rededicated to Divine Mercy.

Jesus, I trust in you, because I am bathed in the peace that pours from your heart. I see your wounded side, leading to your heart, and I believe. I begin to understand what resurrection means. You do not wait for me to come, but reach down to me in my darkness to lift me up. You would rather bring sinners home than punish them. You come to me in word, in sacrament, in art. You come to me even when I am alone in a room with the doors locked.

We shouldn’t look down on Thomas. We should do as he did. That is what the Lord wants us and invites us to do. Today, Jesus wants you to see and touch his wounds. As you do, you will begin to understand the depths of his love. And you will remember his promise of mercy.

We need to contemplate this image again with new eyes. Divine Mercy Sunday makes us look, with Thomas, at the body of the Risen Lord. It is a wounded body, and it is glorious.

Jesus, meek and humble of heart, make my heart like yours.

Thanks to Fr. I.S. from the Czech Republic, who composed the meditation on which this homily is based.