He fascinates us. But why?

What is less fashionable than a strong man? Than a soldier? Than the Man in the White Hat? He’s so 1955. He’s so 1562, if Peiter Breugel’s painting is any indication.

But for some reason we postmodern worldlings, and our hopping pop culture, won’t let go of Saint Michael. Here he is, the warrior himself, in a-thousand-and-one incarnations on Pinterest.

Why does this angel attract us? Precisely because he’s no Dudley Do-Right or Nelson Eddy; no flimsy caricature. He’s real. And, in a time of flickering screens and shades and shadows, we need the real.

Here is this awesome being who chose God in total freedom. He was ready to fight to defend his choice. And he won (Revelations 12:7-9).

The Church teaches that angels are pure intellect and will. They have awesome smarts, as Adam and Eve did before the fall, and because they have no bodies they can be anywhere in less than an instant (see Catechism of the Catholic Church, 328-336). Michael had all that. He had freedom and knowledge and power we can only dream of. And yet he did not rebel against his Creator. He chose to serve.

His name is a question. Michael, מיכאל or Mi-kha-El, is Hebrew for “Who is like God?” You see this same phrase, in some representations, emblazoned in Latin on Michael’s shield: “Quis ut Deus?” It’s rhetorical, folks. We know, as he knows, that there is no other like Him. And yet we forget. 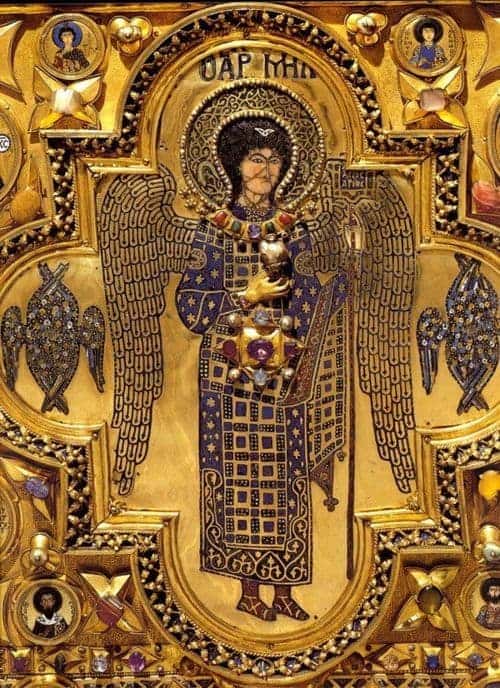 Saint Michael the Archangel, from the pala d’oro in the Basilica of Saint Mark in Venice

We think of Saint Michael when the powers of death surround us. When Satan and his prowling spirits crowd in, as real as can be. When battle is raging and victory seems a dream. When we are afraid, too despairing to be proud — then! Then it is to this angel, this warrior, this cosmic good guy that we cry. We feel what the prophet Daniel felt: “Suddenly, a hand touched me, which made me tremble on my knees and on the palms of my hands. (Daniel 10:10)”

We tremble — we who fear the Truth — but we know, for now, we are safe.

And at that time shall Michael stand up, the great prince which standeth for the children of Thy people: and there shall be a time of trouble, such as never was since there was a nation even to that same time: and at that time Thy people shall be delivered, every one that shall be found written in the book. (Daniel 12:1)

Saint Michael, Archangel, defend us in battle;
be our safeguard against the wickedness and snares of the Devil.
May God rebuke him, we humbly pray,
and do thou, O Prince of the heavenly host,
by the power of God, cast into hell Satan
and all the evil spirits who prowl about the world seeking the ruin of souls. Amen. (This prayer, composed by Pope Leo XIII, was said after Low Mass from 1886 to 1964 and is still used in many places.)