Today is the feast of Saint Cecilia. Over 1,500 years ago, in Rome’s Trastevere district, a young, polished and headstrong Christian noblewoman stood pat in the face of torture and death, ultimately winning the martyr’s crown. Today we give thanks for that witness.

Cecilia, along with her new husband Valerian, were prominent members of Rome’s noble class in the early third century. According to tradition, Cecilia told Valerian (on their wedding night) that she was called to a life of virginity, and that her guardian angel would very soon personally confirm this vow to him. Imagine Valerian’s reaction! Shortly after, the angel did just that, and Cecilia and Valerian lived happily together in secret chastity. Valerian, along with his brother Tiburtius soon converted to Christianity. Eventually, the status quo came to an end when the trio’s devotion was discovered by Roman authorities eager to extinguish this new religion which forbade its followers from recognizing the official gods of state.

The pious brothers were the first to win the crown of martyrdom. We’re told that their appointed guard, Maximus, converted to Christianity as a result of his encounter with the holy duo. (He too was martyred by the way.) Shortly after, Cecilia herself was put to the sword. Thus was Cecilia forever tied to the faithful of the Eternal City, who look upon her with great affection as their Saint. (Her name is still mentioned in the Canon of the Mass.)

Cecilia, Valerian, Tiburtius and Maximus were buried together in the catacombs along the Appian Way, at the time the popular locale for Rome’s martyred Christians. In the ninth century, the holy remains were eventually transported from the catacombs to this sacred spot, built over Valerian and Cecilia’s house. Centuries later (1599), the bodies were discovered remarkably well preserved. Cecilia was decked in noble, golden robes typical for women of her high status in society. Underneath the silk and golden embroidery however was a coarse sack cloth. Blood soaked rags were found near her feet. The faces on the brother’s decapitated skulls still evinced their fraternal resemblance, and the larger physique of the Roman guard Maximus was evident. 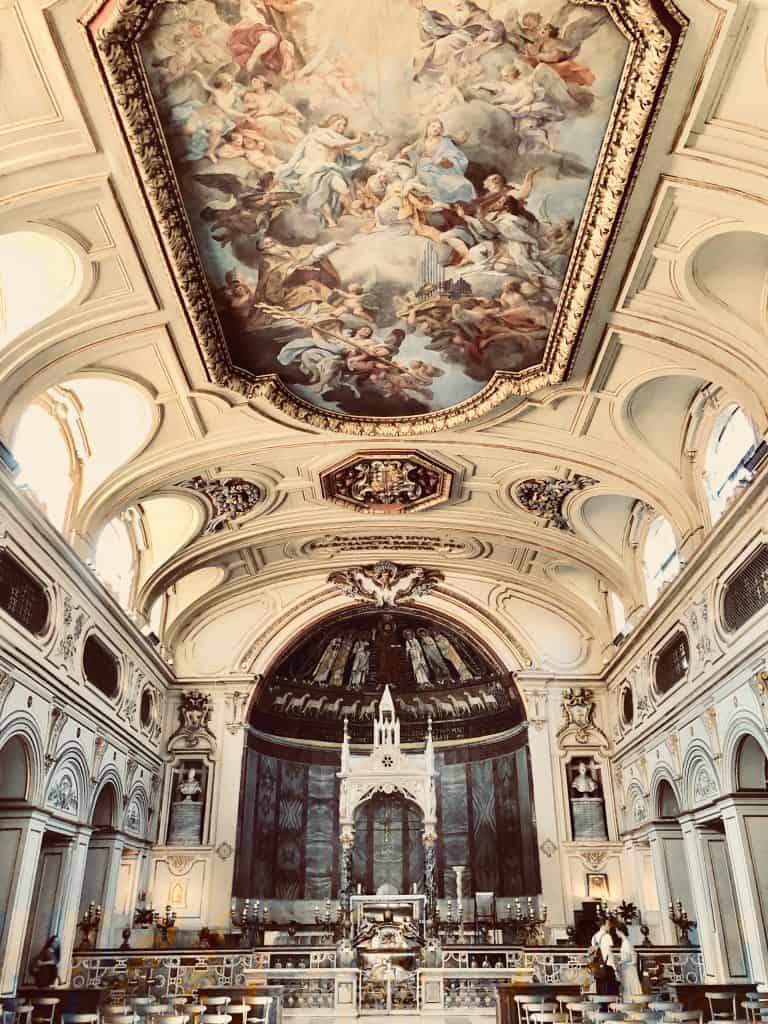 Today you can go to the scene of this ancient Roman drama. If you cross over the Tiber from the center of Rome and enter the rione (district) of Trastevere, make your way through a corridor of narrow streets and you’ll eventually find yourself in the courtyard of the church of Saint Cecilia. The building is a case study in centuries of decorative and stylistic layering upon layering. Peel back the out-of-place 18th and 17th century additions though, and you can arrive at the beginning. 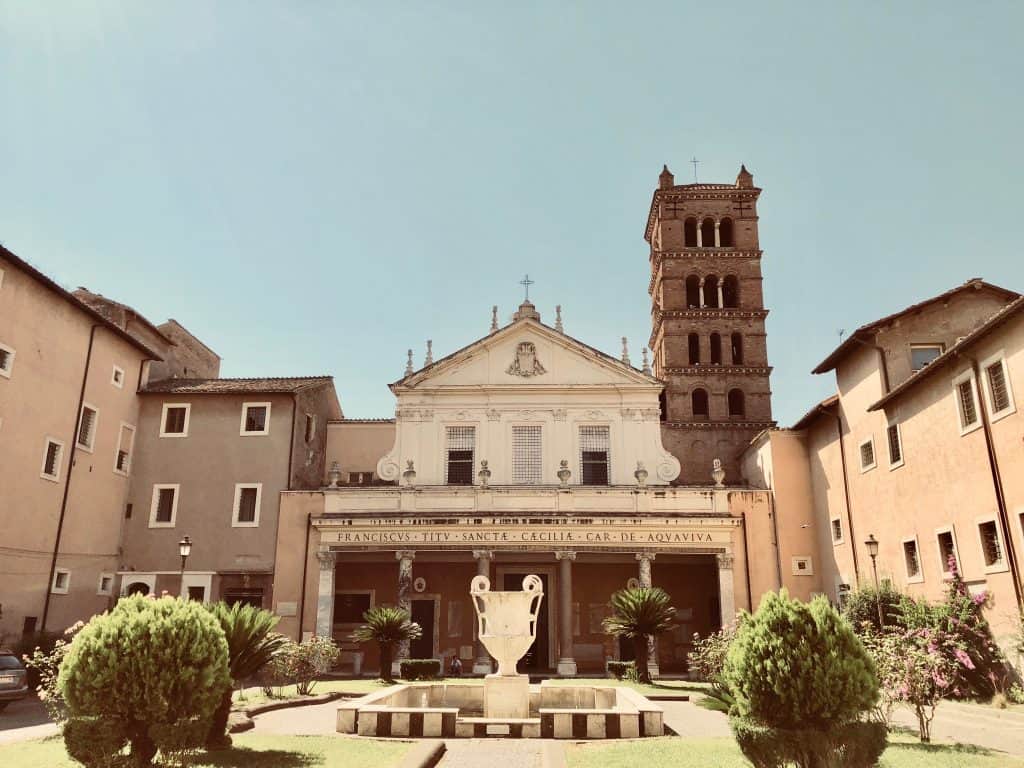 Stepping into this serene courtyard, you feel centuries removed from the noise and bustle of the congested streets of Rome. Notice the simple fountain. The large vase in the center of the pool is believed by many to have graced the house of the martyr buried here. The gentle breeze carries the scent of nearby lilacs and lavender. 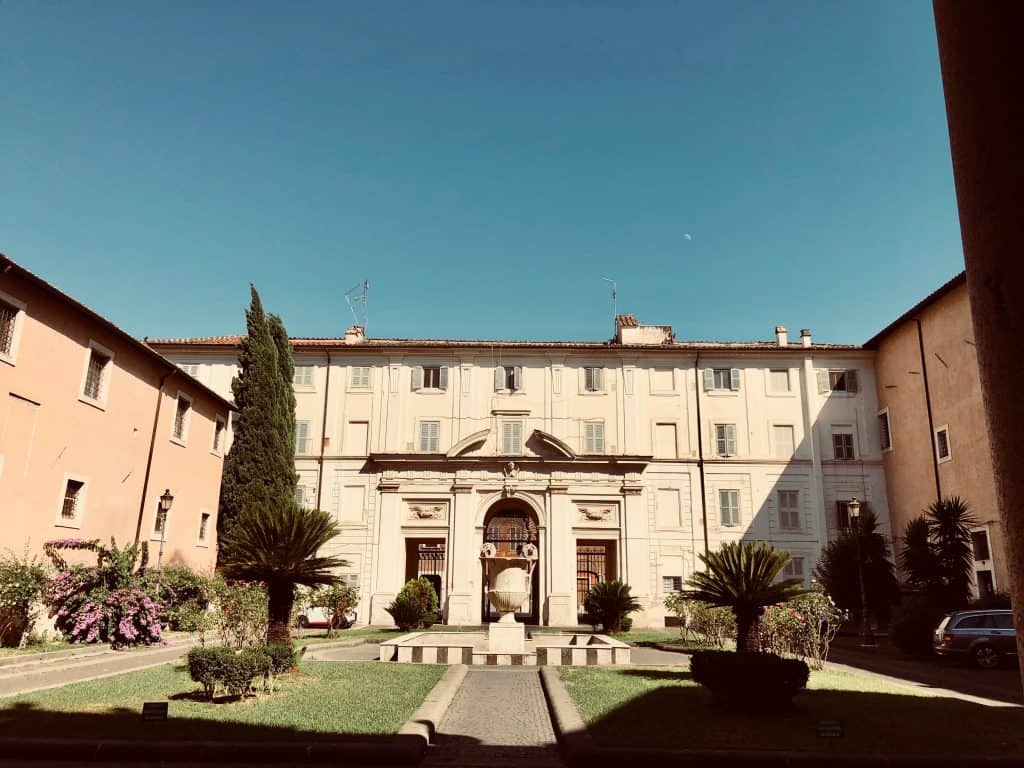 Walk inside the church and the long main aisle focuses your attention on a striking sculpture under the main altar, towering medieval baldacchino and ninth century apsidal mosaic. As you approach, notice three golden angels hovering over the white sculpture of a woman lying on her side with her head turned sharply away from you. (It’s easy to forget that the rolling white folds you see are not of soft silk but of stone.) Cecilia’s graceful pose is ruptured somewhat by the awkward bend at the neck, which is exposed, revealing a deep gash. The fingers are also in a curious position.

On one hand, the index finger is extended, while on the other, three fingers are gently unfurled. One God, three Divine Persons. Cecilia’s last testimony of faith. What you see frozen in marble here by Stefano Maderno is exactly how the young Saint’s incorrupt body was discovered in 1599. 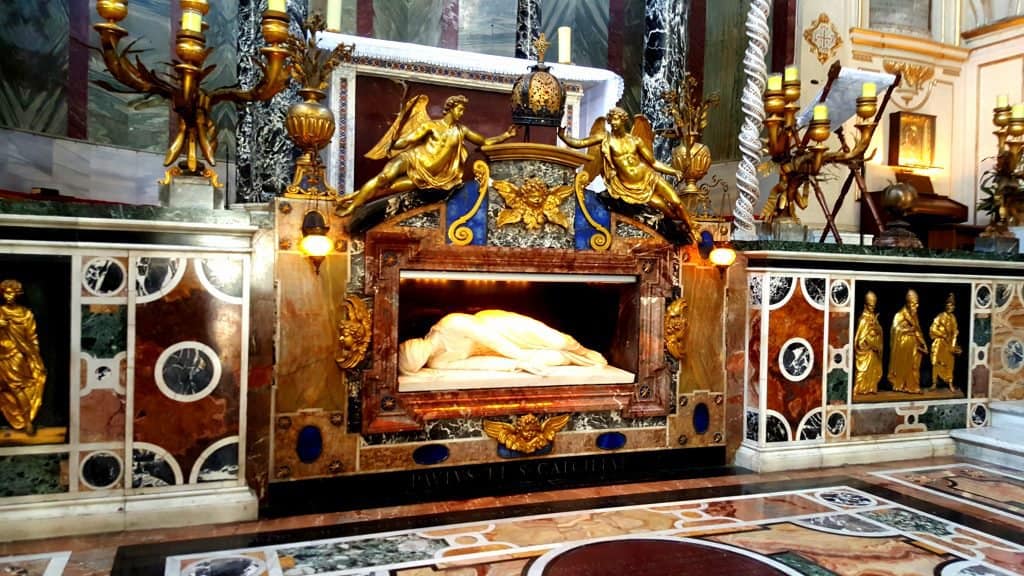 To the left of this stunning work of art is a bas relief depicting Cecilia (reminding us of her link to music) along with her brother and brother-in-law. 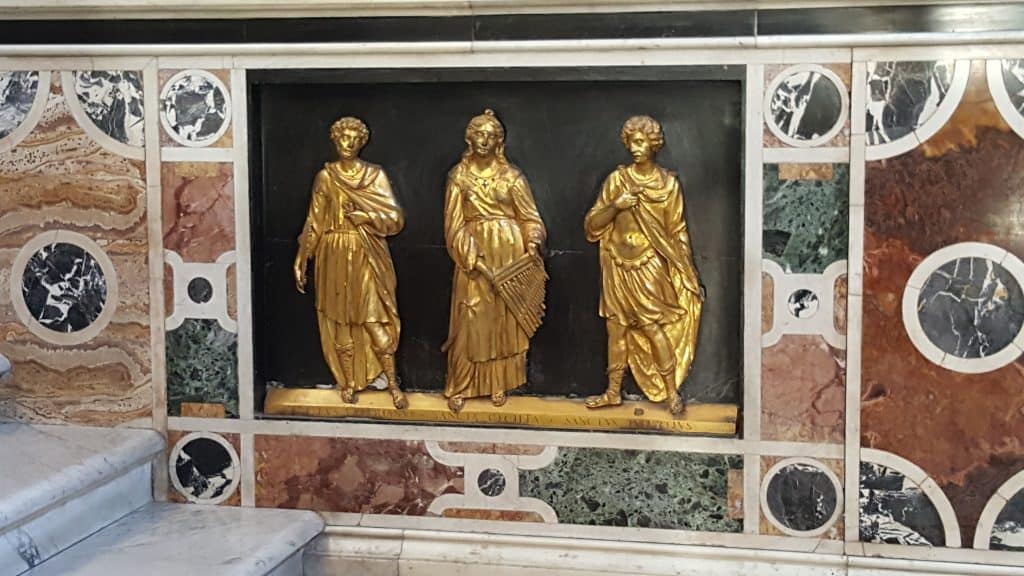 Pay the three Euro in the small gift shop to access the crypt. Go down the narrow stairs, and you’ll find yourself in a musty, cavernous space. Parts of it have been spruced up over the past couple centuries to make room for an elegant chapel, but much of the underground space still shows off the Roman ruins of what used to be an upper class house in imperial Rome. This is ground floor, ancient Rome. Notice the inscriptions set into the walls. Run your hands over them and  connect with the people who chiseled those words into this stone some 2,000 years ago. 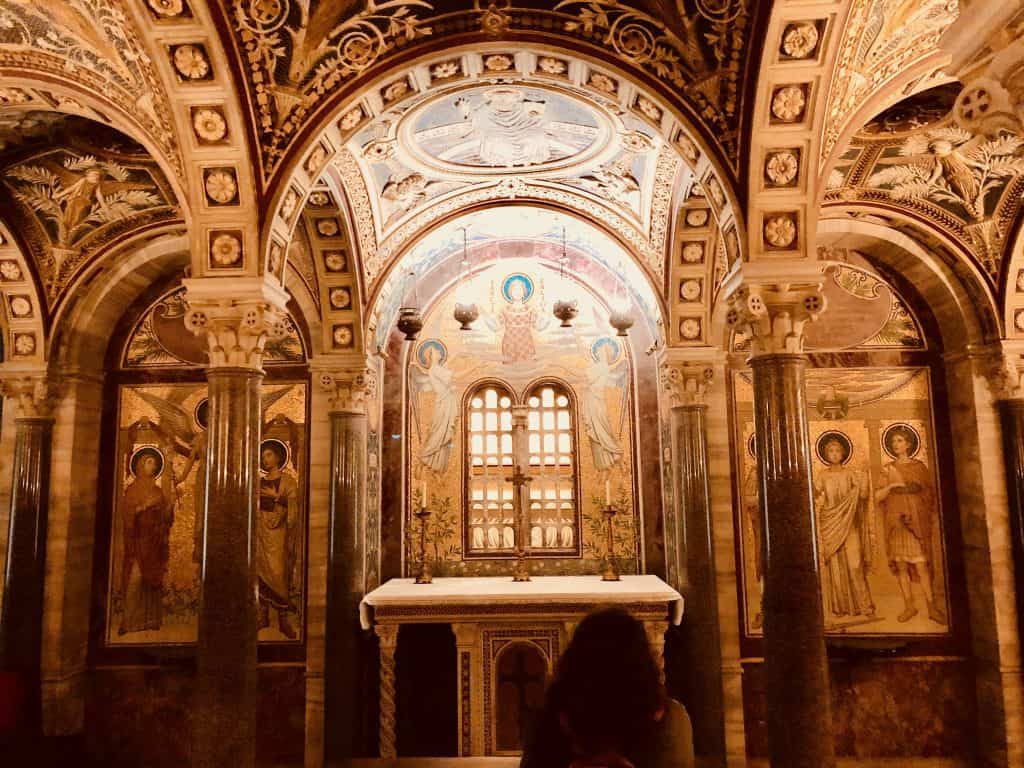 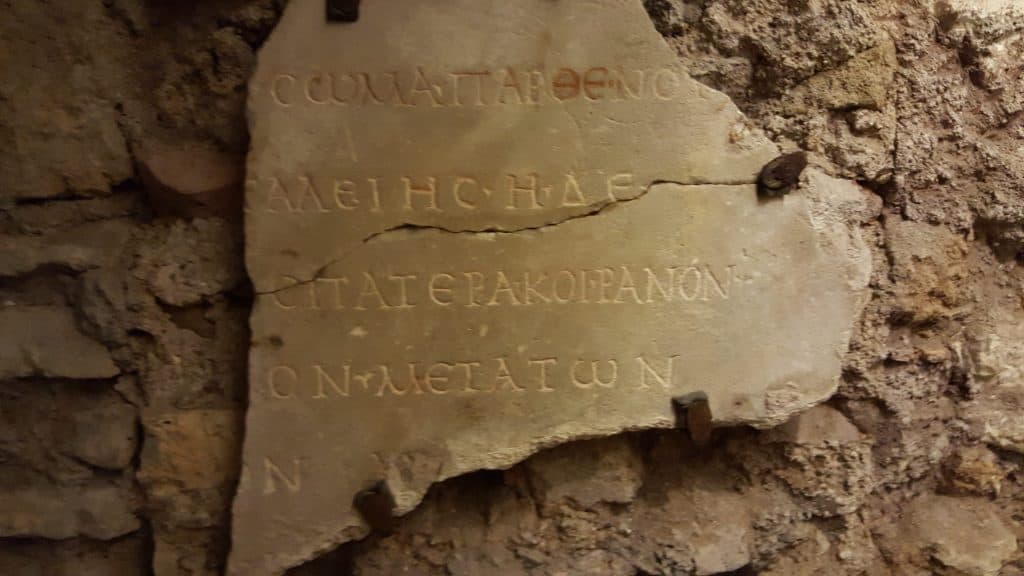 Today, cloistered Benedictine nuns reside here. They’ve been here since the 16th century. If you visit in the evening, you can pray with them as they chant the Divine Office. The timeless and captivating cadences of the chant fill the ancient space and are well-suited for the church dedicated to the patron saint of musicians.

As you leave the serene church and step back into the busy, crowded streets, remember what took place here long ago. Martyrs gave their blood in the ultimate act of witness to the risen Lord. Around the world in 2021, many still do. Now, they intercede for us. We ask for the prayers of all the Church’s martyrs, and give thanks.

* As a resource for learning more about the history of Rome’s church’s, June Hager’s book Pilgrimage is excellent and highly recommended.