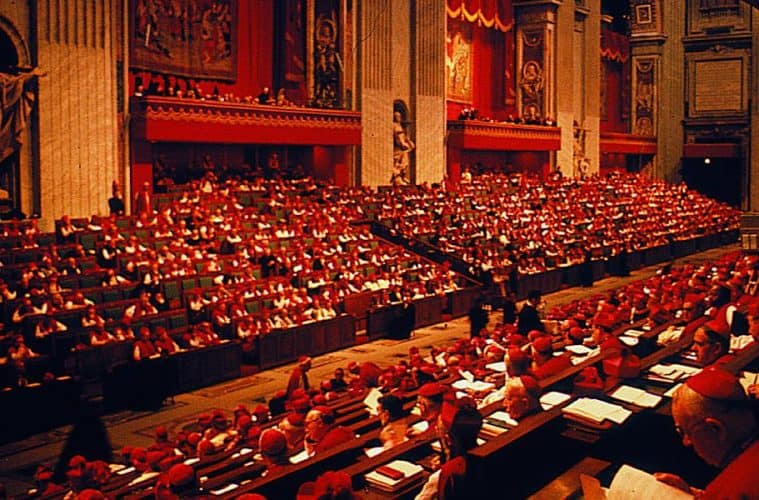 Was Vatican II Necessary? A Response to George Weigel

George Weigel is a champion of the Second Vatican Council. He defends the council from being twisted and co-opted by leftwing Catholics; and he defends it from being twisted and lambasted by certain traditionalist Catholics. Most recently, Weigel mounted his defense in the Saturday pages of the Wall Street Journal. He acknowledges, in the article, that Vatican II was followed by many ecclesial tragedies, abuses, and confusions. He asks the provocative question: “Was Vatican II really necessary?” Weigel argues that, despite the many disasters that followed in the council’s wake, Vatican II was indeed necessary. As far as I can tell, his argument (in a numbered, premise-conclusion format) is this:

1. Pre-Vatican II Catholicism was “closed in” on itself and did not evangelize enough.

2. Pre-Vatican II Catholicism did not adequately emphasize that Christ was the answer to human problems.

3. The Church needs to evangelize and to emphasize that Christ is the answer to human problems.

5. The council “fully inserted Catholicism into the ecumenical movement’s quest for Christian unity.”

6. The council “dramatically reconfigured the Church’s relationship to its religious parent, Judaism.”

This argument is invalid. You can agree with all the premises and still hold that the council was not necessary. Suppose pre-Vatican II Catholicism didn’t evangelize enough or emphasize Christ sufficiently. Does it follow that Vatican II was necessary? No. Perhaps all we needed was simply to evangelize more and emphasize Christ more. Why did we have to call a council and overhaul the Church to meet those goals? Weigel doesn’t say. So, he’s missing a key part of the argument. What about premises 4-5? They do not entail the conclusion either. One could admit that Vatican II did lead to greater lay participation in all aspects of Church life, insert the Church into the ecumenical movement, and dramatically reconfigure our relationship with Judaism, but deny that any of those things were necessary. Perhaps we don’t need lay lectors, communion ministers, etc., nor do we need ecumenical prayer sessions, etc. Premises 4-6, therefore, do not force us to accept Weigel’s conclusion. The argument is invalid.

Another problem with the argument is that a lot of its premises are suspect.

Premise 1. Did pre-Vatican II Catholicism not evangelize enough? That depends on what “enough” means. In one sense, the Church has never evangelized enough. We could always do better. Maybe in this sense the premise is true. But, if so, it’s irrelevant to Weigel’s argument. Pre-Vatican II Catholicism could have been the most evangelical version of Catholicism in the history of the Church, and yet it would still be true that it could have evangelized more. Now, if Weigel is saying that pre-Vatican II Catholicism was bad at evangelizing compared to most other times in Church history, then he needs to give some evidence for that claim. Seems implausible. Europe was sending large numbers of missionaries out, and there were many lay missionaries and missionary societies, before the council. Between the close of the Council of Trent and the opening of the Second Vatican Council, the Catholic Church had spread the Faith around the globe (most notably to the Americas, where about half of all Catholics live today). Does this period really stand out from the rest of Church history as evangelically weak?

Premise 2. What is the evidence that pre-Vatican II Catholicism was particularly bad at emphasizing the importance of Christ? That’s a pretty unflattering thing to say, and Weigel again gives no evidence for this claim.

Premise 3. This one is obviously true.

Premise 4. This premise is false. Lay participation in Church life didn’t grow in every respect. Yes, we got more lay liturgical ministers, and we got more lay diocesan-level managers. But we didn’t get a higher percentage of lay people involved in sodalities, parish groups, religious third orders, Catholic professional societies, etc., nor did we get a higher percentage of lay people going to Church or receiving the sacraments.

Premise 5. This is true.

Premise 6. Not clear what this one means. Also, how could it be true without contradicting what Weigel says about Vatican II putting all the emphasis on Christ and the need to evangelize? If you say that Jews can be saved by the Old Covenant without becoming Christian, then you are deemphasizing the need for Christ. And, if you pull back on trying to convert Jews (as happened after the council) then you are not evangelizing. So, what is this change in our understanding of Judaism that Weigel has in mind? He should be more specific. Because the most striking changes that actually occurred following the council were bad.

Weigel fails to prove that the Second Vatican Council was necessary. His argument is invalid, some of his premises are ambiguous, and other premises are false.

Why is Weigel so intent on showing that Vatican II was necessary? He wants to show that it was necessary because he believes that the council should remain the focus of Catholic attention. He insists that solutions to contemporary and future problems must be found in the documents of the council. I suggest, in contrast, that we stop focusing so much on Vatican II. The council was not the avante-garde sexual liberation manifesto that some on the left portray it as; it was not the heretical synthesis of all errors that some traditionalists portray it as; and it was not the source and summit of all Catholic doctrine, liturgy, and practice—and cure of all contemporary ills—that Weigel portrays it as. Vatican II was a council. It happened. It mostly restated ancient Catholic teachings. It didn’t revitalize the Church. It won’t revitalize the Church in the future. And, moving forward, we do not have to rely on it to the exclusion of the Church’s enormous deposit of tradition. At this point in the Church’s history, almost 60 years after the closing of Vatican II, St. Paul, St. Ignatius of Antioch, the Council of Nicaea, St. Jerome, St. Augustine, St. Benedict, the Council of Trent, St. Thérèse of Lisieux, Caravaggio, the Baltimore Catechism, and the old Mass, may (very plausibly) be more useful for revitalizing our ailing Church than Gaudium et Spes, Dignitatis Humanae, or any of the other documents of the Second Vatican Council. Let’s stop this fixation on Vatican II. And let’s begin the work of rediscovering and reclaiming the full breadth of Catholic tradition.