You can feel it – we are facing an existential threat that history has rightly cautioned us against. This threat undermines the very fabric of our society, a society where we were once free to live out our Catholic faith. But the enemy is at our gate, where we work and where we live, demanding we conform to their twisted ideologies.

But hope is not lost, men. As heads of households, fathers, brothers and friends, we can prepare for what already moves against us and band together to defeat this enemy with practical preparation, Mary’s intercession and His Grace.

Join us June 12th, 2021 from 10:00A to 5:00P in Hillsboro, WI on a beautiful working farm with Fr. Altman, Michael Voris and Doug Barry to start strengthening your fortresses – spiritual and corporeal.

Note: This conference is for young adult men (suggested 16+) and adult men only. Tickets are NON-REFUNDABLE. By attending you agree to the Photography and Videography Release, and the Liability Waiver and Release of Claims below. 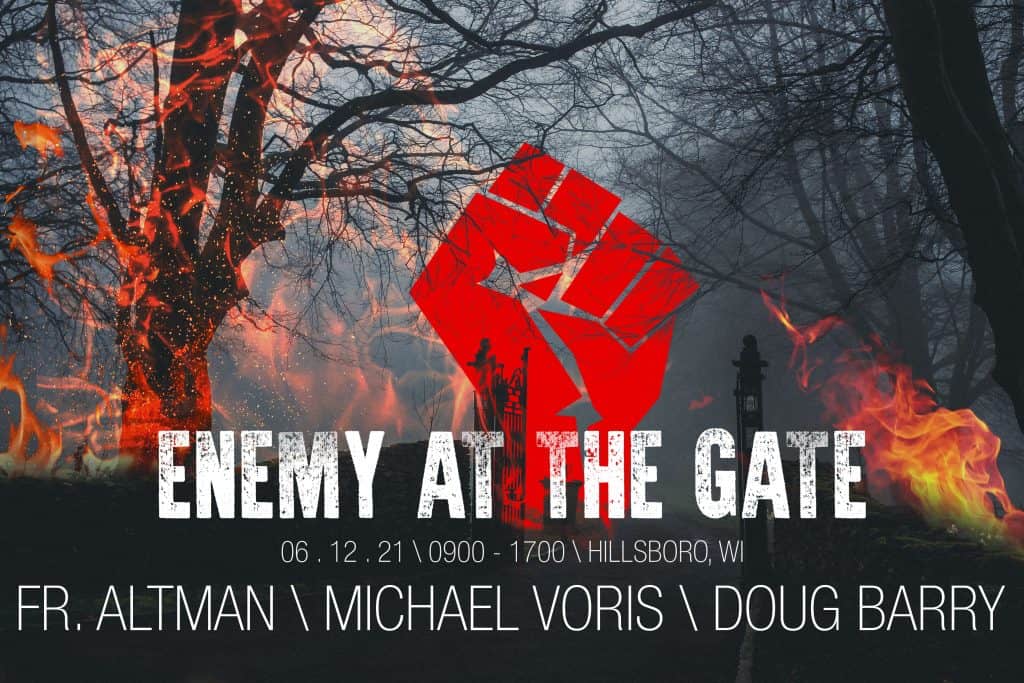 Note: This conference is for young adult men (suggested 16+) and adult men only. Tickets are NON-REFUNDABLE.

Logistics: For out of town guests, we recommend you fly into either La Crosse or Madison airport the day before and make arrangements to stay in a hotel that night. La Crosse is closer to Hillsboro by about 1 hour. There is a hotel in Hillsboro – if that is full, you have several backup options: a) Stay in La Crosse and drive the hour the morning of b) Stay in Reedsburg, WI which is about 30-40 min east of Hillsboro c) Stay in the Wisconsin Dells (very touristy) d) Stay in Madison, WI and drive about 2 hours the morning of. 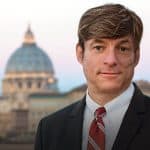 Michael Voris is the founder and President of St. Michael’s Media / Church Militant — a media enterprise established to address the serious erosion of the Catholic faith in the last 50 years.

Michael was born in 1961, the year before the Second Vatican Council, and grew up in a Church coming apart at the seams and hemorrhaging believers by the millions.

He graduated from the University of Notre Dame in 1983 with a degree in Communications and moved into a career as television news reporter, anchor and producer, mainly with CBS News, where he received four Emmy Awards for Excellence in Broadcast Journalism.

Michael has spoken at hundreds of events both nationally and internationally, including Australia, Europe, Africa, Canada and the Philippines. Michael carries a message of the need for a stalwart defense and promotion of Catholic doctrine and Catholic truth with him wherever he goes in the hope of reinforcing the faithful. 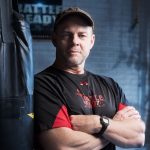 Doug Barry, devoted husband and father of five, is the founder and director of the Catholic ministry RADIX. Since 1990 he has traveled both nationally and internationally to help spread and defend the Catholic faith. Speaking to young and old alike through television, radio and live appearances, Doug is also well known for his powerful one-man performance of The Passion of Christ, which has been aired on EWTN and performed live both nationally and internationally. Doug was co-host for EWTN’s television program ‘Life on the Rock’ for 8 years, and is currently host for EWTN’s new television program ‘BATTLE READY.’

BATTLE READY is a mission to help strengthen and encourage the soldier of Christ to be aware of, prepared for and engaged in the battles that we all face, body, mind and soul! Since the start of the BATTLE READY initiative, Doug has traveled nationally and internationally speaking at parishes, conferences and other events rallying together tens of thousands of Catholics and lighting a fire for the faith. The need in our world for committed, unwavering and well-trained soldiers of Christ is tremendous! We all have the responsibility to own the battle for our souls and for our Church and to fight like there is no tomorrow!

I hereby authorize Cream City Catholic, any anyone acting pursuant to its authority, to:

Record my likeness and voice on a video, audio, photographic, electronic, digital, or any other medium.

Use, reproduce, display, distribute, and make derivative works in any medium (e.g. print, digital, and/or any other media formats and platforms now known or hereafter devised) of these recordings for any purpose that Cream City Catholic, and those acting pursuant to its authority, deem appropriate.

I release Cream City Catholic and those acting pursuant to its authority from liability for any violation of any personal or proprietary right I may have in connection with such use(s). I understand that all such recordings, in whatever medium, shall remain the property of Cream City Catholic.

BY ATTENDING AND/OR PARTICIPATING IN THE ACTIVITY, YOU ARE DEEMED TO HAVE GIVEN FULL AUTHORIZATION TO THE AUTHORIZED PARTIES TO THE FULLEST EXTENT PERMITTED BY LAW.

LIABILITY WAIVER AND RELEASE OF CLAIMS:

Cream City Catholic cannot guarantee that its participants, volunteers, partners, or others (collectively, “Attendees”) in attendance will not become infected with COVID-19. Attendees are solely responsible for taking precautions they deem necessary to remain safe, including not attending the Activity to begin with. By attending, Attendees accept the risk associated with COVID-19, or any other illness that could be contracted throughout the Activity.

I HEREBY RELEASE, WAIVE AND FOREVER DISCHARGE ANY AND ALL LIABILITY, CLAIMS, AND DEMANDS OF WHATEVER KIND OR NATURE AGAINST CREAM CITY CATHOLIC AND ITS AFFILIATED PARTNERS AND SPONSORS, INCLUDING THE PROPERTY OR SITE OWNERS OF ANY ACTIVITY, INCLUDING IN EACH CASE, WITHOUT LIMITATION, THEIR DIRECTORS, OFFICERS, EMPLOYEES, VOLUNTEERS, AND AGENTS (THE “RELEASED PARTIES”), EITHER IN LAW OR IN EQUITY, TO THE FULLEST EXTENT PERMISSIBLE BY LAW, INCLUDING BUT NOT LIMITED TO DAMAGES OR LOSSES CAUSED BY THE NEGLIGENCE, FAULT OR CONDUCT OF ANY KIND ON THE PART OF THE RELEASED PARTIES, INCLUDING BUT NOT LIMITED TO DEATH, BODILY INJURY, ILLNESS, ECONOMIC LOSS OR OUT OF POCKET EXPENSES, OR LOSS OR DAMAGE TO PROPERTY, WHICH I, MY HEIRS, ASSIGNEES, NEXT OF KIN AND/OR LEGALLY APPOINTED OR DESIGNATED REPRESENTATIVES, MAY HAVE OR WHICH MAY HEREINAFTER ACCRUE ON MY BEHALF, WHICH ARISE OR MAY HEREAFTER ARISE FROM MY PARTICIPATION WITH THE ACTIVITY.

ASSUMPTION OF THE RISK.

I acknowledge and understand the following:

Participation includes possible exposure to and illness from infectious diseases including but not limited to COVID-19. While particular rules and personal discipline may reduce this risk, the risk of serious illness and death does exist;

I knowingly and freely assume all such risks related to illness and infectious diseases, such as COVID-19, even if arising from the negligence or fault of the Released Parties; and

As a participant or attendee, you recognize that your participation, involvement and/or attendance at any Cream City Catholic event or activity (“Activity”) is voluntary and may result in personal injury (including death) and/or property damage. By attending, observing or participating in the Activity, You acknowledge and assume all risks and dangers associated with your participation and/or attendance at the Activity, and You agree that the Released Parties will not be responsible for any personal injury (including death), property damage, or other loss suffered as a result of your participation in, attendance at, and/or observation of the Activity, regardless if any such injuries or losses are caused by the negligence of any of the Released Parties (collectively, the “Released Claims”).

Cream City Catholic reserves the right to refuse admittance to any Attendee for any reason. If an Attendee is refused admittance, the ticket price will be refunded.

BY ATTENDING AND/OR PARTICIPATING IN THE ACTIVITY, YOU ARE DEEMED TO HAVE GIVEN A FULL RELEASE OF LIABILITY TO THE RELEASED PARTIES TO THE FULLEST EXTENT PERMITTED BY LAW.

There are no reviews yet.

Only logged in customers who have purchased this product may leave a review.