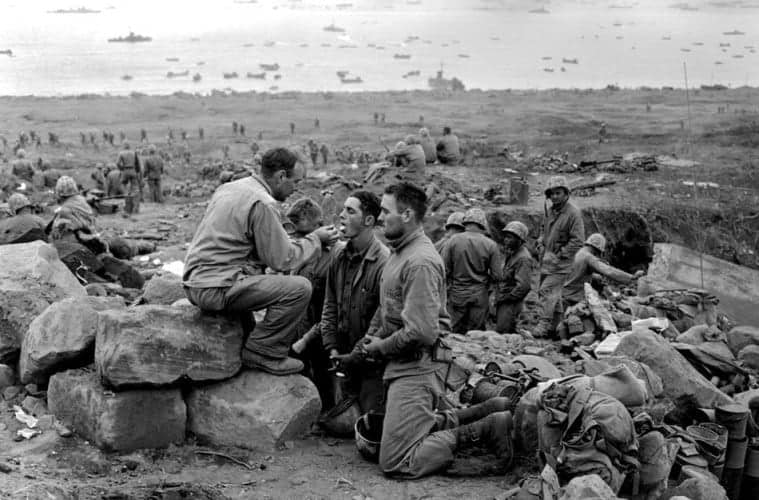 MARCH 3, 1945 U.S. Marines receive Communion from a Marine chaplain on Iwo Jima. The battle for the island was extremely costly for both sides: only about a thousand of the 25,000 Japanese defenders survived; the Americans suffered about 26,000 casualties. The island was not fully secured by the American forces until March 26, but the needed airfields were up and running earlier. (AP Photo/Joe Rosenthal) Originally found here.

This article, appearing in The Milwaukee Journal-Sentinel, discusses various efforts being made by Milwaukee-area churches (Catholic and non-Catholic) to attract men back to the pews. The concern is that men are, for some mysterious reason, checking out from liturgy or other Christian services. Some of the more, um, interesting solutions and ideas involve church-into-man-cave transformations, or a North Woods-inspired sanctuary or “gathering space”. Is that all it takes? Will a sacred space that more resembles a Cabela’s store than a church reverse the exodus of men from our local churches? I have my doubts.

According to a statistic presented in the article, the male/female discrepancy is especially felt in the Catholic Church, where 64% of parish life is comprised of women.

So why are the guys MIA?

This is another one of those instances within our local Church where you have a lot of people who subscribe to the conventional wisdom scratching their heads and asking “Why? Why? Why?” when the answer is not particularly elusive. This really isn’t a surprise to me, or to many others. I recall attending Mass in Rome at a local parish and, unbeknownst to me when I entered, it was a “Children’s Mass”. Start to finish, the liturgy was replete with childish, Sesame Street-styled songs and embarrassing hand motions. As I scanned the pews, only two groups of people were participating: the small children, and the women, especially the older women. The men, from young to old, were standing there, stone-faced, arms crossed, totally disengaged. It was painful. The music and everything else was thoroughly emasculating. No self-respecting man would participate in that. And they didn’t. If this is what is meant by “active participation” on the part of the laity, I and lots of guys, want nothing to do with it. Run for the hills.

This phenomenon has been replicated ad nauseam in the United States as well.

Authentic masculinity has been knee-capped in our Church. This trend is conspicuously apparent in our liturgical life, as any manifestation of authentic masculinity is attacked as boorish male chauvinism, old manifestations of discrimination and oppression from a Church that is “unfairly” dominated by an all-male hierarchy. (The article cites an example of a parish in the Diocese of Madison where the pastor insisted on only boys serving as acolytes. Predictably, he received tons of criticism as a result. Fortunately, Bishop Morlino backed up his priest.) What’s more, many of the “liturgical planning committees” have been taken over by women. The embellishments of many church buildings often look like a Jo-Ann Fabric was detonated inside. Pastel ribbons, crafts, baskets, streamers, quilts…BOOM!

What I’ve often referred to as the “Oprahfication” of our Church has had a direct effect on the number of men who opt out of liturgy. Much of our Church culture has imbibed a pandering, touchy-feely, soft sofa approach to dealing with real challenges, and guys don’t dig that. Coupled with a de-emphasis on the Sacramental life, the Eucharist in particular, many men simply see no point in attending Mass if all they’re “getting” is meaningless psychobabble and Stuart Smalley motivational talks. To be clear: I’m not excusing or endorsing that course of action, as we still need the Sacraments, but in light of the catechetical lacuna in the U.S., it makes a certain degree of sense. This is why more traditional Catholic parishes are witnessing remarkable growth, attracting young men in particular. Sacrament, solemnity and tradition are given pride of place, not childish narcissism. “Only you can help you.” Throw on an alb and a chasuble and…