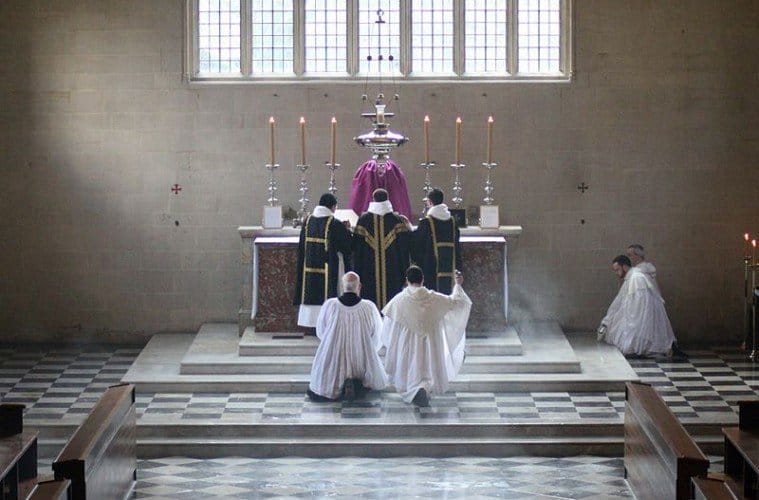 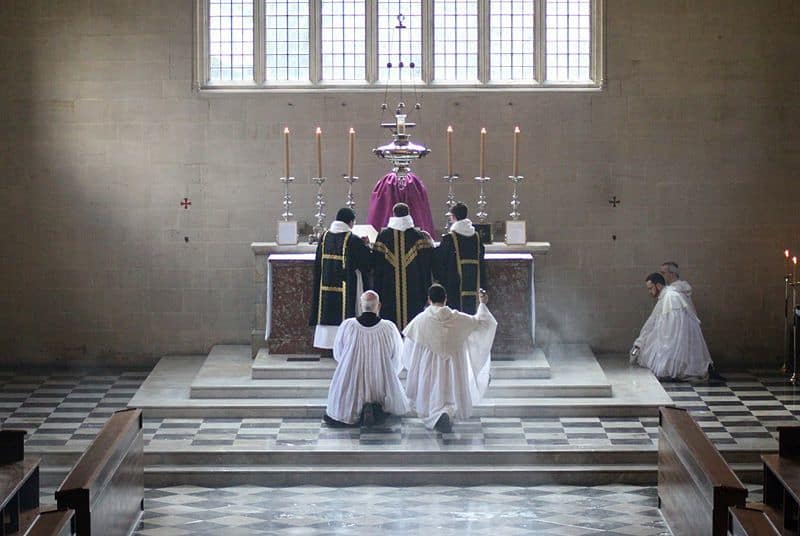 Has Mass become a bit too chummy and informal, even a bit awkward? Is a sense of the sacred conspicuously M.I.A.? Does your parish more and more resemble a pastel cushioned gathering space or an airport terminal, and less and less an actual church? Have feeble homilies left you underwhelmed? If you’ve answered “Yes!” to these questions, rest assured, you’re not alone. The real question is, what can we do about it?

What we’ve witnessed over the past forty years of liturgical life is a systematic breakdown in solemnity and reverence during Mass. At many parishes, gone is any sense of awe before the Almighty. Within the context of widespread narcissism in our mainstream culture, we have constructed a liturgical culture built largely around ourselves and the everyday instead of God and the transcendent. What is the result? “All Are Welcome” is the result. A trivialization of the sacred is the result. If God is pushed to the side, so too will personal sin take a back seat to the elevation of the self. We don’t need healing. We don’t need saving. We don’t need forgiveness. We just need constant reaffirmation, constant pep-talks.

Patrick Archbold recently put forward seven suggestions that he believes, if implemented, would result in a dramatic restoration of liturgical reverence. I’ve added some reflections to his ideas:

1. Ad orientem: Insecurities over the old line about the priest “with his back to the people” need to be overcome. When the priest faces east with the faithful, faces the rising sun (symbolizing the Resurrection), faces Christ in the tabernacle, the people will notice very quickly that liturgy is first and foremost a dialogue with God, not with each other. The principal focus will be on God and not on the “faith community.” It’s actually a beautiful sign of unity to pray together with the priest facing the same direction. When you talk to someone, you usually face him, right? So when the priest talks/prays to God, shouldn’t the same rule apply? Well, it did for about 1,960 years. Prior to recent changes, in the 2,000 year history of the Church, it was never common practice for the priest and the people to face one another. There’s a reason for this. If the faithful are informed about the rich history of ad orientem worship in Catholic liturgy, most will embrace it wholeheartedly. It’s actually a pretty cool thing to experience.

2. Restore chant and polyphony: The Second Vatican Council was very clear about the special place that Gregorian chant holds in Catholic liturgy. Benedict XVI called chant “the supreme model of sacred music.” And yet, how many Catholics in Milwaukee can say that they experience it on Sundays, or even on Christmas or Easter? I can think of probably two or three parishes in the entire archdiocese where traditional sacred music is heard on a regular basis. As a result of the widespread dismissal of so many recent Church statements on Gregorian chant, Catholics are being deprived of a significant and beautiful part of their inheritance. If you are a fan of Vatican II, which we certainly are here at CCC, Gregorian chant and polyphony cannot be swept aside in favor of Glory and Praise, guitars and the piano. But that’s precisely what has happened, and all in the name of Vatican II! (It’s all very odd.) But don’t take our word for it. Here’s what Pope Saint John Paul II said on the topic,

With regard to compositions of liturgical music, I make my own the “general rule” that St Pius X formulated in these words: “The more closely a composition for church approaches in its movement, inspiration and savour the Gregorian melodic form, the more sacred and liturgical it becomes; and the more out of harmony it is with that supreme model, the less worthy it is of the temple.”It is not, of course, a question of imitating Gregorian chant but rather of ensuring that new compositions are imbued with the same spirit that inspired and little by little came to shape it.”

3. Latin: Newsflash: It is (still) the official language of the Church. While allowing for a limited use of the vernacular, Vatican II was crystal clear about the preeminent role of Latin in Catholic liturgy. I ask again: How many Catholics in Milwaukee can say that they ever hear one word of Latin on Sundays? The reliance on Latin for liturgical prayers is a powerful symbol of the unity of the universal Church. It is time that we be totally honest about how much of the actual teachings of the Second Vatican Council, specifically those found in Sacrosanctum Concilium, are being implemented in our parishes. Please, no more myth-making and false narratives about how Vatican II radically modernized liturgy. Read the documents. Apply their instructions. Simple.

4. Proper reception of Communion (kneeling and on the tongue): It’s pretty basic: If you treat something as common and ordinary, less importance will be given to it. It’s human nature. Let’s transfer this truism over to the Blessed Sacrament. Is the Blessed Sacrament “common and ordinary?” Well, what do Catholics believe? We believe that Jesus Christ is wholly present (body, blood, soul and divinity) in every consecrated Host. It’s not just a nice symbol. It’s not about simply sharing a meal with friends. We’re not Protestant here. So why is it that our handling of the Blessed Sacrament has gotten so lax over the past several decades? It’s pretty clear that there is a connection between far fewer Catholics believing in the Real Presence and the casualness with which so many approach the Sacrament nowadays. Trust me, if we could see Christ before us in the Blessed Sacrament, we wouldn’t remain on our feet. Powerless, overwhelmed, humbled, we’d fall to our knees in total surrender.

5. No more extraordinary ministers of Communion:

Following on the previous point, Saint Thomas Aquinas states that,

… because out of reverence toward this sacrament nothing touches it but what is consecrated, hence the corporal and the chalice are consecrated, and likewise the priest’s hands, for touching this sacrament. Hence it is not lawful for anyone else to touch it, except from necessity — for instance, if it were to fall upon the ground, or else in some other case of urgency. ~ St. Thomas Aquinas, Summa Theologica (III, Q. 82, Art. 3)

How far we’ve come from those days. We’ve all seen it. An army of Extraordinary Ministers of Holy Communion marches into the sanctuary. One will nonchalantly approach the tabernacle to extract Hosts to distribute to the faithful. Chalices holding the Precious Blood are handed out to casually dressed helpers and they take up their stations in various parts of the church. Is there really the need for such large numbers of Extraordinary Ministers? I know they want to help and be involved in the life of the parish. That’s a great thing. I have no doubt that they are motivated with the best of intentions. But is this the best way to do it? Let’s be perfectly honest: Has the proliferation of Extraordinary Minsters helped reinforce reverence among the faithful toward the Blessed Sacrament, or has it contributed to a troubling level of informality? Again, people will react accordingly if they observe something being treated as ordinary and common.

6. Appropriate attire: This one’s a no-brainer, and it shouldn’t even be controversial. We’re talking about Mass, not Wings Night at the local sports bar. Liturgy is the most important act we participate in every Sunday. Shouldn’t our dress reflect that reality? The same adage I’ve mentioned before applies here: If something is approached as common and ordinary, consequences will naturally follow. What we need to see are pastors at our parishes who implement a clear dress code. You see dress code signs at Saint Peter’s Basilica in Rome. Why not here?

7. General reverence and sacredness: We need to rediscover the beauty and significance of bowing, kneeling, genuflecting and beating the breast. Before and after so many Masses, there’s a buzz of chatter and activity. As soon as the priest gives the final blessing, or after the final hymn, people make an immediate dash for the exit, or start conversing with those around them. What happened to silence? So many “little” things have in truth done great damage to the basic sense among the faithful of bring present in a sacred space and participating in a sacred act.

Is it impossible to restore a sense of the sacred at parishes? No. It would be quite easy, really. It just requires a little initiative and instruction so that people understand what’s going on.

So why don’t we start taking modest steps? What’s holding us back?