A photo from the Milwaukee Catholic Herald caught my attention. It depicts individuals dancing to the Cousins Center chapel for liturgy to commemorate the one-year anniversary of the Archdiocesan Synod. The caption of the photo reads as follows:

Dancers from St. Martin de Porres Parish in Milwaukee … lead worshippers to Mass at the Cousins Center in St. Francis on June 14, 2015. The worshippers gathered on the one-year anniversary of the Archdiocesan Synod in a “Return to the Upper Room.” 2015 saw the beginning of implementation of synod priorities. 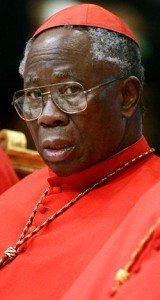 Perhaps there was no dancing during the actual liturgy itself. I hope that is the case. (It’s reasonable to question dancing immediately before Mass too.) But the photo provides an opportunity to discuss an important subject. What are we to make of liturgical dance? If we do some digging, we’ll find some clues. The former Prefect of the Congregation for Divine Worship and the Discipline of the Sacraments, Cardinal Francis Arinze spoke to this very issue some years back when he said during a Q&A session,

Dance is not known in the Latin Rite of the Mass. . . . But the directive we give in our Congregation is this: In the strict liturgy, that means the Mass, the Sacraments, Europe and America should not talk of liturgical dance at all because dance as known in Europe and North America is not part of worship. So they should forget it and not talk about it at all. . . . The bishops of each country have to watch this. . . . But as for North America or Europe, we think that the dance should not enter the liturgy at all and the people discussing liturgical dance should spend that time saying the rosary, or they should spend that time reading one of the documents of the popes on the Holy Eucharist. We have already enough problems. Why banalize more? Why desacralize more? Haven’t we already enough confusion. If you want to admire a dance you know where to go, but not Mass.

Then-Cardinal Joseph Ratzinger offers this observation on the subject of liturgical dancing in The Spirit of the Liturgy: “It is totally absurd to try to make liturgy ‘attractive’ by introducing dancing pantomimes. . . . Dancing is not a form of expression for the Christian liturgy. Liturgy can only attract people when it looks, not at itself, but at God.” (p. 198-199)

Here’s the deal. I don’t think many people, like the dancers for example, are intentionally trying to undermine liturgy by inserting whatever they think is appealing. I’m sure they’re joyful people who mean well, but are totally unfamiliar with Church teaching on the liturgy. All the more reason then, that those responsible for organizing and overseeing these events (especially when it comes to Synod implementation!) should inform themselves and take a lot more care to ensure that liturgy is done according to the rubrics and norms established by the Church and those directives given by relevant congregations that are responsible for regulating the liturgical life of the Church. “Just because we want to” is not a sufficient reason to introduce changes or practices to the liturgy. Vatican II clearly states this in Sacrosanctum Concilium.