Mary Eberstadt’s outstanding book, Adam and Eve after the Pill: Paradoxes of the Sexual Revolution, is a must-read for Catholics, indeed for anyone concerned about society’s collective turning a blind eye to a growing crisis. I found it at a used book store the other day and read it over the course of two days. It’s a relatively short book, but it is also so fascinating that I found it difficult to put down. In short, Eberstadt’s thesis is that, while the sexual revolution promised liberation and, by extension, greater happiness (to women in particular), fifty years later, ubiquitous societal collapse and upheaval have been the undeniable fruits of the movement. As a direct result of the sexual revolution and, more specifically the introduction and widespread acceptance of the contraceptive pill, the world is afflicted with an ever-increasing number of horrific societal pathogens: an increase in family break-ups; higher rates of divorce; an increase in single mothers; a rise in abandoned children; the emergence of the dark world of the university date rape culture; the insidious pornography industry that destroys everything it touches; the rise of the one-night stand/hook-up culture; increased poverty; higher rates of both depression, suicide and sexually transmitted diseases; skyrocketing dependency on psychotropic drugs, and a growing alienation, mistrust and manipulation between men and women. The list goes on. Women “have it all” today, in terms of unbridled sexual “freedom” and unhindered professional ascendancy, but every indicator shows that they are increasingly unhappy. Why?

Over the past thirty-five years, “women’s happiness has fallen both absolutely and relative to men’s in a pervasive way among groups, such that women no longer report being happier than men and, in many instances, now report happiness that is below that of men.” *

Adam and Eve after the Pill asks a stubborn question: Despite overwhelming empirical evidence that proves the damage wrought by the pill, with its bifurcation of sex and procreation, why are so many (the overwhelming majority in fact) unwilling to consider or tolerate any objection to the contraceptive mentality? To start off her book, Eberstadt compares the situation today to the climate that reigned during the height of the Cold War in the United States. Throughout those decades, elites in every segment of society refused to face the clear as day facts about the moral bankruptcy and impracticality of Communism and atheistic materialism. The “will to disbelieve” (a phrase coined by Jeane J. Kirkpatrick) prevailed in the media, political and entertainment classes. Eberstadt applies Kirkpatrick’s phrase to today’s “all-in” contraceptive mentality. Facts be damned. We’re sticking with the pill, even if it destroys us (which it is in the process of doing). Interestingly, the ideological dogmatism and fixity of the pro-contraception crowd mirrors the caricature they themselves routinely make of the supposedly “anti-science” religious right.

To make her case, Eberstadt relies on numerous scholarly studies (from secular institutes and thinkers) to demonstrate the simple truth that the sexual revolution has been a disaster for society, and most significantly for women. Each chapter takes a look at different areas in society in which the seed of the sexual revolution has taken root and inflicted major damage: women, men, children, and the university scene. Other chapters deal with thought-provoking topics like, “Is Food the New Sex?” and “Is Pornography the New Tobacco?” In the excellent chapter on food and sexual trends, Eberstadt asks the provocative question:

Many people who wouldn’t be caught dead with an extra ten pounds–or eating a hamburger, or wearing real leather–tend to be laissez-faire in matters of sex. In fact, just observing the world as it is, one is tempted to say that the more vehement people are about the morality of their food choices, the more hands off they believe the rest of the world should be about sex. When was the last time you heard or used the word “guilt”– in conjunction with actual sin as traditionally conceived, or with having eaten something verboten or not having gone to the gym?

The final chapter takes up Pope Paul VI’s Humanae Vitae and shows just how prophetic this nearly universally derided encyclical was in predicting the inevitable and logical havoc resulting from the contraceptive mentality.

The encyclical warned of four resulting trends: a general lowering of moral standards throughout society; a rise in infidelity; a lessening of respect for women by men; and the coercive use of reproductive technologies by governments.

Check, check, check and check. All of Paul VI’s predictions have come to pass. Cardinal Robert Sarah frequently laments the last of these warnings in his preaching and writing, as the United Nations and Western powers typically place conditions on foreign aid to poorer countries based on whether or not they accept the introduction of birth control.

This book is outstanding. It’s well-written, witty and, as I said, saturated with helpful facts and statistics. We need more voices like Eberstadt, who will be courageous and tell the simple truth about the pill. Pick up a copy of her book and spread the word. 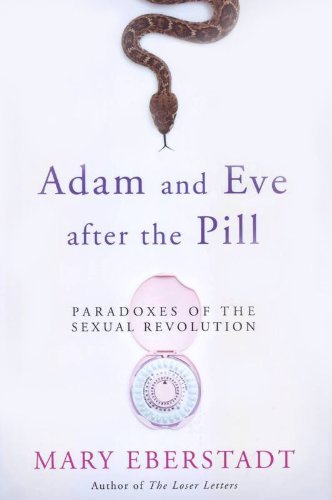