I think we can all relate to the feeling of leaving home for the first time. You miss the smell of your Mom’s cooking, the noises of the house and those subtleties of being home that permeate your being to the core without a way to describe them. I can almost taste my favorite dinners just writing this. Deep breath…

Now imagine this. Imagine going home only to find a lot of small, almost imperceptible changes. You might not realize it at first, but something is just… off. Sounds unsettling doesn’t it? Well, when it comes to liturgy, this has been the experience of most Catholics.

There have been so many small (sum of parts = large) movements away from traditional liturgy over the past few decades that most Catholics these days have no idea they are participating in a Mass that is thoroughly drenched in Protestantism and modernism. What we do know is that, since the misinterpretation, and dishonest dissemination of Vatican II, Catholic numbers (in terms of baptisms, marriages, vocations to the priesthood and religious life, etc.) have dropped sharply – I don’t think we should be surprised. In short, we are witnessing a Catholic identity crisis here. When your local parish features liturgical dancers, tambourines, clap along songs and banal, feel-good homilies devoid of doctrine, why stay? We are all drawn to the truth, but you won’t find it in vacuous, feel-good drivel. One of the greatest assets we have is the fact that Catholicism is truly ancient and has not historically changed to suit the whims of the times. 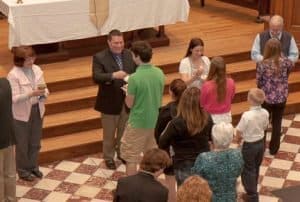 Perhaps your local parish isn’t as bad as I described. It is moving in the right direction, but I still can’t get on board with altar girls and an army of Eucharistic Ministers. We’ve written on these topics before so I won’t belabor them here. What’s more important is that our local novus ordoparish is only three blocks away – infinitely convenient for us as parents of small children and with one on the way. Despite this amazing level of convenience, we decided it was time to go home again. 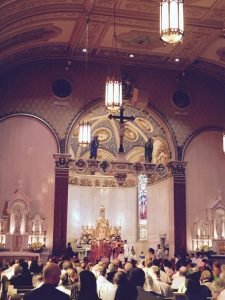 St. Stanislaus as seen from the pews.

St. Stanislaus is home for us now. When we toured St. Stanislaus and attended Mass, our daughter commented, “I could stay here for a hundred million years, Dad.” My wife commented, “This is where we belong.” It takes us twenty more minutes to get there, but I know that my children will be raised with a strong, untainted Catholic identity and be exposed to a beautiful, soul lifting liturgy. This is a gift that will last their entire lives. We aren’t the only ones either! St. Stanislaus is primarily a commuter parish packed with young families from far and wide. They have all come for the Extraordinary Form at St. Stanislaus.

Let me be clear; the problem of a diluted Catholic identity is not simply a matter of Ordinary vs. Extraordinary Form. The Catholic identity (pure liturgy, the sacraments, the True Presence, sacred music, etc.) is under attack due to loose interpretations of Vatican II. It has been used as false leverage to validate wide ranging interpretations and now we find ourselves with diminishing numbers clamoring to appease modern culture. But things are coming to a head. My generation (yup, I’m a millennial) is growing restless with the watered-down Catholicism found at 99% of Catholic parishes. By going to traditional parishes, we will vote with our feet and our wallets. 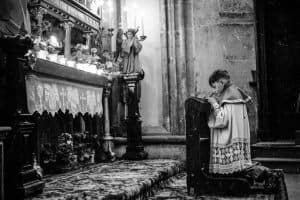 1947: A little boy kneeling at the altar of a cathedral in post-war Vienna. (Photo by Ernst Haas/Ernst Haas/Getty Images)

I think there are many more Catholics out there that like me – raised not ever knowing about what true Catholic identity means (or even just basic catechesis). I hope they have an opportunity to experience the Church with all the beauty it has to offer before they decide to go the way of so many Catholics these days. I can tell you this much: if you find yourself unsettled by diluted Catholicism or liturgical abuses, you will find the most welcoming, friendly, reverent community and food for your soul at St. Stanislaus. I did. Hope to see you at Mass!