Some years back, I was visiting religious orders. I wanted to serve God, and pursue sanctity, by living in community and doing intellectual work. Joining the Dominicans—who have a long tradition of community/intellectual life—was the obvious thing to do. I’m a mid-Westerner. So, I visited the formation house of the mid-West province of Dominicans. I came away from the visit underwhelmed. It was clear that the prayer life, the liturgy, the discipline of the order, the theological training, and the commitment to Catholic orthodoxy were all drastically diminished. These were not the Dominicans of St. Dominic. These were not even the Dominicans of 60 years ago. Everything had changed.

In the United States, we are blessed with Catholic religious who are traditional, faithful to Church teaching, and celebrate the Latin Mass. We have the Institute of Christ the King. We have the monks at Clear Creek Monastery, the Carmelite monks in Wyoming, the Benedictine nuns in Missouri. But we are lacking a group of traditional religious that is focused on teaching and the intellectual life. My search for such a community took me far from my Midwestern home. It took me to France—to the Fraternity of Saint Vincent Ferrer. 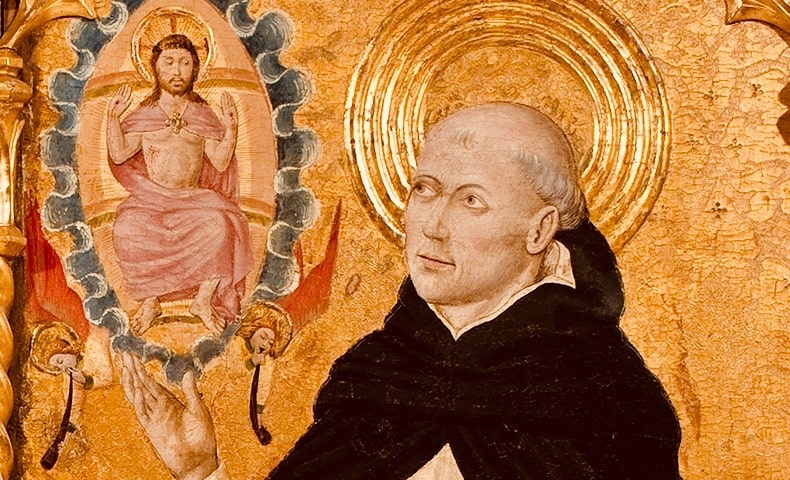 I stepped off the train on a unusually hot day at Sablé-sur-Sarthe. I had made arrangements with one of the brothers to be picked up at the station. Sitting and sweating in blistering sun, I tried unsuccessfully to talk with other travelers, including one who was coming with me to visit the Fraternity. I don’t speak any French. They didn’t speak any English. It is a strange experience to be with other human beings, with whom you share so much, and to be so unable to communicate. Eventually, we loaded up into the car and went for a winding drive through the countryside of France, making our way to the tiny Medieval town of Chémeré-le-Roi, where the Fraternity of Saint Vincent Ferrer calls home.

The monastery was beautiful. Some of it was old; much of it was new. The church, now completed, was then still under construction. Upon arrival, I was met by the guest master. He spoke perfect English, and had an American accent. It turns out that he went to boarding school in the United States. The guest master showed me to my room, which overlooked a garden and a small cow pasture, hemmed in by stone walls. Then we went to the chapel to join the community for prayer.

I was impressed immediately by this community. Every one of the brothers and fathers looked ascetical and tough. They were all lean. They had closely shaved heads. Everything they did, they did quickly, but with apparent calmness and focus. My initial impression was that these religious had been shaped by religious life, in the way that athletes are shaped by rigorous training. The brothers and fathers of the Fraternity of Saint Vincent Ferrer seemed like spiritual athletes to me.

I, however, was not so tough. Before arriving at the monastery, I had gotten sick. A bad cold. It hit me hard when I arrived in Chémeré, and I was sick for the duration of my visit. When the community woke early to sing the longer morning offices, I was still in bed. Later in the morning, after some cherished coffee, I ventured out of my room to the chapel. The community was praying yet again. After the mid-day prayer, they processed out single-file to their dining hall (called the “refectory”) and had lunch. The food was simple. But it was good. Coffee, wine, cheese, and bread were plentiful. Meal prayers were long and elaborate, and the brothers/fathers ate every meal in silence, while one of them read. Clean-up after the meal was also a communal affair, and it was quickly, efficiently executed.

After lunch, the guest master asked me to go on a walk. The day was hot (in fact the whole week was hot). But the countryside was idyllic. We walked through the little town, past an old mill, through the woods, and back again. The father told me the history of the town. It was a Roman outpost. He also told me about the history of the Fraternity of Saint Vincent Ferrer. The group was formed in the 70s by Louis-Marie de Blignières as a response to the crisis in the Church—especially the doctrinal confusion—that followed the Second Vatican Council. The Fraternity is meant to be Dominican. They wear the white Dominican habit. They say the Dominican version of the old Latin Mass. They pray Dominican prayers. They observe Dominican customs and disciplines. But the Fraternity is technically not Dominican. They are not under the control of the Dominican order. Yet, as it seems to me, they are more Dominican than the Dominicans.

The guest master told me about the intellectual life of the Fraternity. Today the Fraternity is sending its young recruits to do advanced studies—they are a highly educated group. Their work focuses on teaching and writing. They even have their own intellectual journal that they publish, Sedes Sapientia.

I was impressed with the frankness with which the guest master talked of controversial issues in the Church. He addressed them head-on, and he was not afraid to express very unpopular traditional opinions. This approach seems to characterize the entire community’s approach. The Fraternity of Saint Vincent Ferrer attempts to address the pressing controversial issues of our time from a point of view that is both fully traditional and also highly intellectually rigorous. And they train their members to do just that.

There is a great need in the United States for a community like the Fraternity. We have wonderful traditional groups like the Institute of Christ the King and the Fraternity of Saint Peter. But the mission of these groups is to provide the Latin Mass and to build up traditional parishes. Wading into controversial debates is probably not a good idea for the Institute of Christ the King or the Fraternity of Saint Peter. Doing so could put their pastoral work at risk, especially in less traditional dioceses. The nuns at Gower, the monks at Clear Creek, and the monks at the monastery in Wyoming, on the other hand, are focused solely on prayer and contemplation; they are not able to wade into controversial intellectual debates. Thus, in the United States, although we have our traditional religious, we really need a group like the Fraternity of Saint Vincent Ferrer to provide us with intellectual leadership.

After a couple days at the Fraternity’s monastery, I started to get comfortable with the routine. The daily schedule of prayer created a rhythm of life that was truly refreshing. On Sunday, many people from the area came to Mass, crowding the chapel. There was standing room only, and I had to remain outside the door craning my neck to look in and follow the Mass. Everyone sang. Not everyone sang well. But everyone sang. I sang with them. Here was a contrast to my experience at the train station. Most of the congregation could not speak English, or could speak only a very little, and I could not speak French; yet, we could pray together. We knew all of the same Latin words, we knew all of the same chants. There was no distinction between American and French. We were all same—we were Catholics.

I left the Fraternity of Saint Vincent Ferrer as I had arrived. I was impressed. And I was glad to see these men doing such important work. Toward the end of my visit, the guest master talked of a long-term plan to start a branch of the Fraternity in the United States. I said I thought it was a wonderful idea. Perhaps, when the time comes and the Fraternity is ready to start a new monastery, we could put a bid in for Milwaukee.