Inn for a Treat

It starts when you drive down National Avenue. You enter the mists of time.

There’s a store marked “Family Video” (video!) in a hangarlike Moloch that might have been a Kohl’s grocery. Remember those?

There’s a “business machines” storefront called Ace, advertised by a painted mural on the cinderblock wall outside. One expects they sell comptometers.

There’s the beautiful West Allis Farmer’s Market, an open-air place with permanently-fixed roofs looking like something from Budapest.

The river of asphalt runs through it, tending downhill as you head east.

It’s modest and colloquial. And then you get to the Inn. 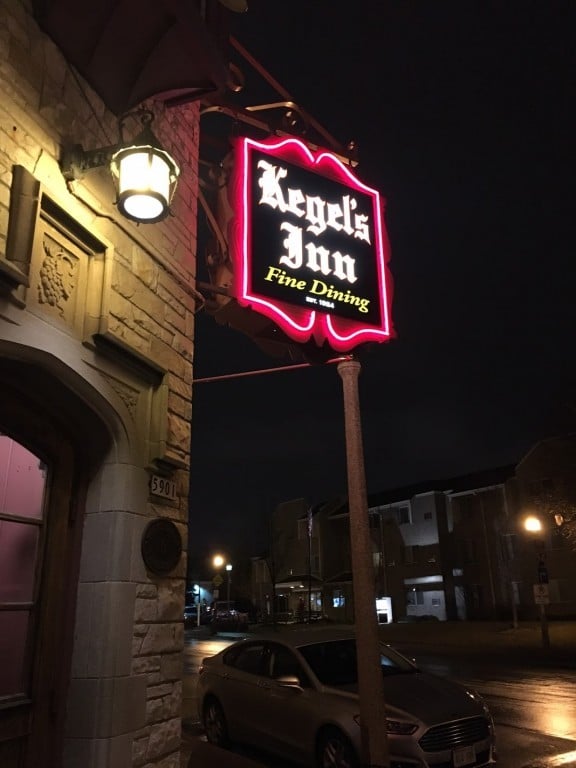 Kegel’s Inn. This is nostalgia on another level. Here, you’re not in West Allis. Maybe Westphalia.

It’s a real palace. The place has been here since 1924. When it opened, the beer they sold was illegal. It was a “soft drink parlor.” A speakeasy.

It’s in the Kegel family even now. We pronounce it echt Milwaukee.

But have you heard of it? Neither had we.

It came to us by a stroke of Siri-serendipity last Saturday night. We’re glad it did. 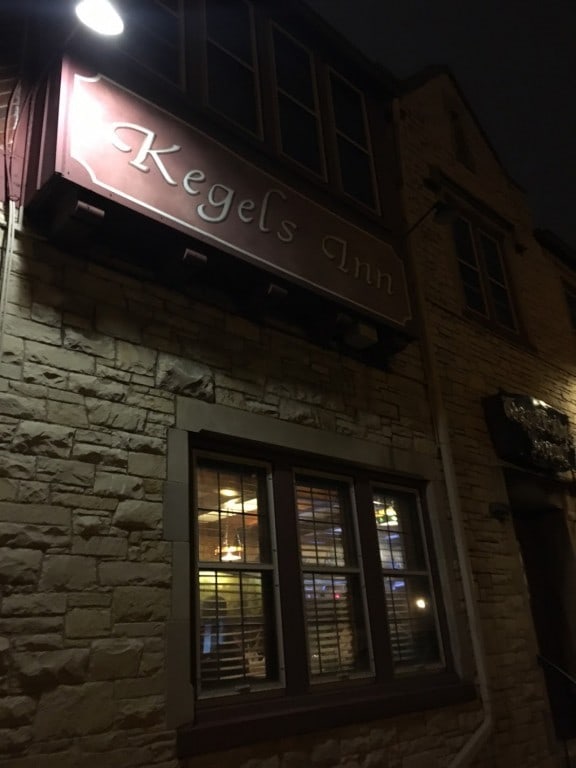 This place came through Prohibition, which was so damaging to Milwaukee’s native beer culture. The Inn’s rich website displays a facsimile of Anna Kegel’s rap sheet for selling alcohol in 1927. Good for her!

The place was reopened with great pomp in the time of Franklin Roosevelt and redecorated in the 30s with the care and craftsmanship one usually associates with houses of worship — right down to the stained glass windows. 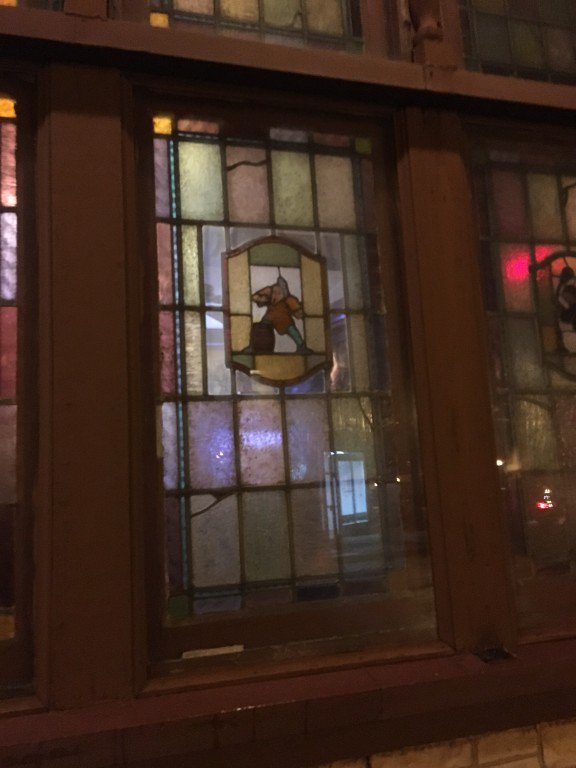 This is a shrine of American Germania.

Kegel’s is in a purpose-built building entirely clad in stone except for the north side, which has the split timbers and stucco one might see in Nuremberg. You come upon a grand front door trimmed in carved stone with a hops motif. A copper lantern green with time hovers above. On the leaded glass in the oak door, a legend: Hail, friend. 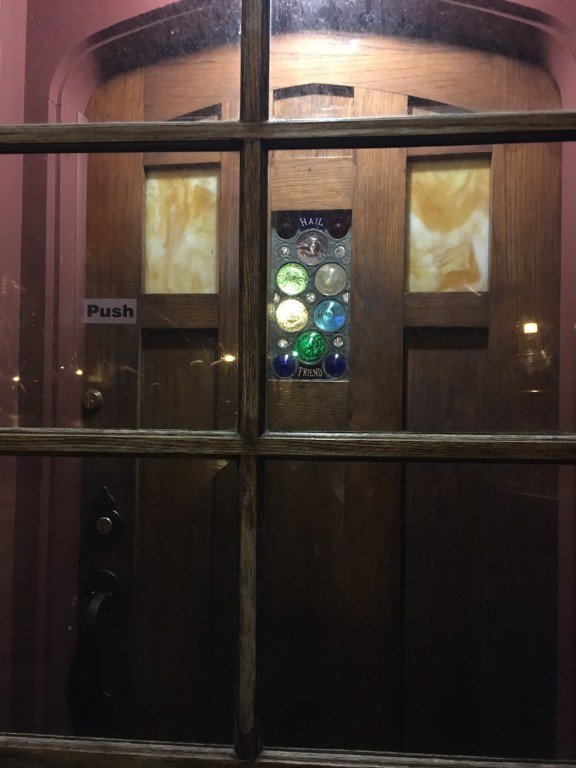 You enter. You gasp.

It’s splendid. Here is the bar — “the longest solid piece of mahogany west of Philadelphia” — backed with mirrors cased in oak. There are tall clay beer mugs, rows of taps and a phalanx of shiny glasses. 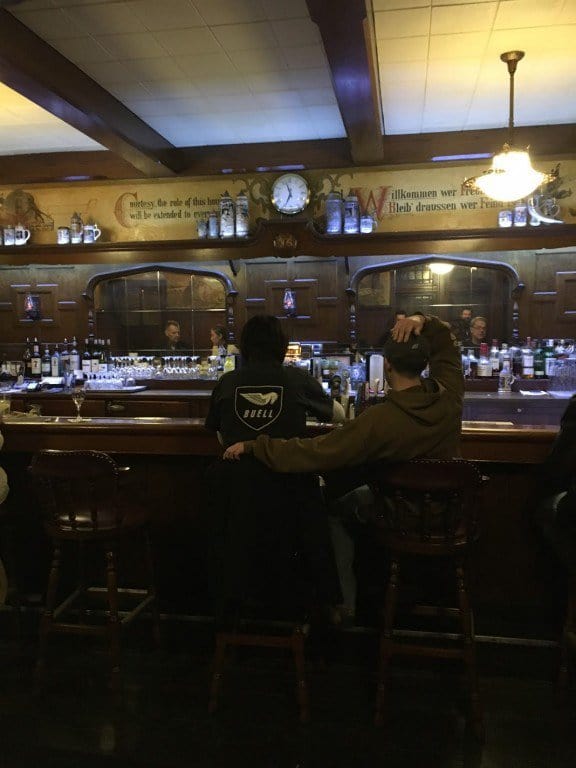 But look above the oak wainscoting. The place has been touched by a barroom Michelangelo and is coated all over in murals and inscriptions. There’s a curling scroll in German: “Wilkommen wer Freund ist, Bleib’ draussen wer Feind ist.” (“Welcome to friends; Enemies, keep out!”)

Another, in English says, “Courtesy, the rule of this house, will be extended to everyone.” Truly democratic. Very American.

And the murals go on and on into two dining rooms. They fly over the waitresses’ station and the ladies’ room door. They dance over beams in the ceiling. There are garlands and vases of flowers. All come from one hand: that of Peter Greis from Darmstadt. He came to New York in 1925. A good time to get out of Germany. 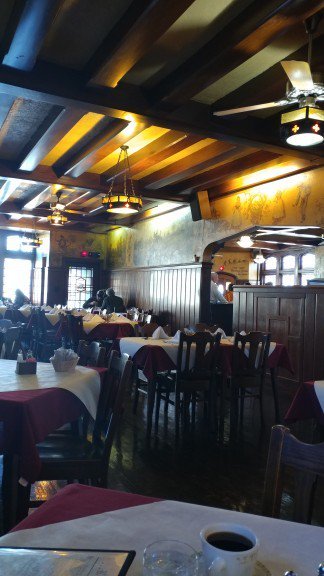 The Hessian artist had a sense of humor. At the start of our meal we raised our glasses in a toast, but above us leered a monkey in a top-hat and waistcoat — accompanied by a hissing cat. “Trink Dein Glas heut’ ohne Sorgen, dann der Kater kommt erst Morgen.” “Drink your glass today without a care, then first thing in the morning the hangover comes!”

Even part-time Germans will know that a Katzenjammer or “cat’s distress” is a hangover. Here you should contract yours from one of 10 draught beers… or a brandy old-fashioned. Kegel’s old fashioned is mildly unorthodox in that it comes with a splash of fizz. The cherry is canonical.

The painted scenes show high as well as low. There are nobles hunting boar amid a species of tree not found in the new world. Wikipedia calls it the Knotted Willow. There are deer and pheasants and gamboling peasants.

Purpose-made wrought-iron chandeliers light the place, with hooded gnomes marching around the rim, each hoisting a mug of beer. Try finding those at Ikea. 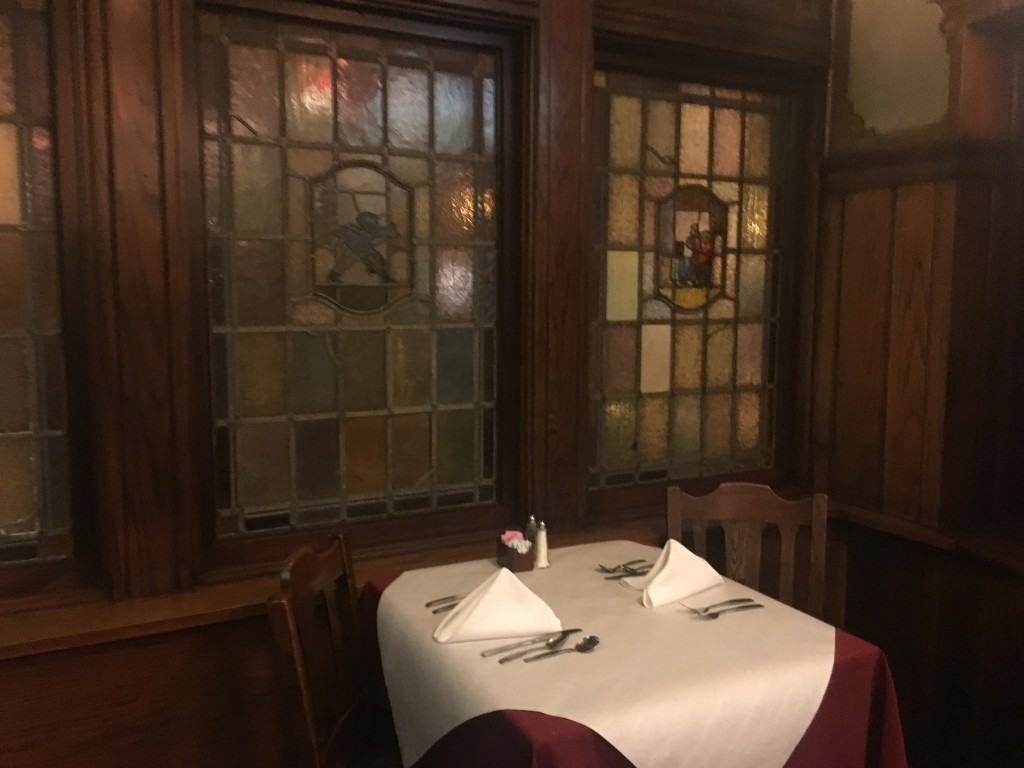 Most of the waitresses seem to have decades of experience. It has made them silk-smooth and professional. They glide over the shiny wood floors with a certain maternal benevolence.

This being Wisconsin and an old place, each main dish comes with soup. We recommend the onion, which costs a little extra. The aroma of good Swiss cheese, melted over the top, hits you the minute it comes. And the wine-dark soup below has unfathomable depth. 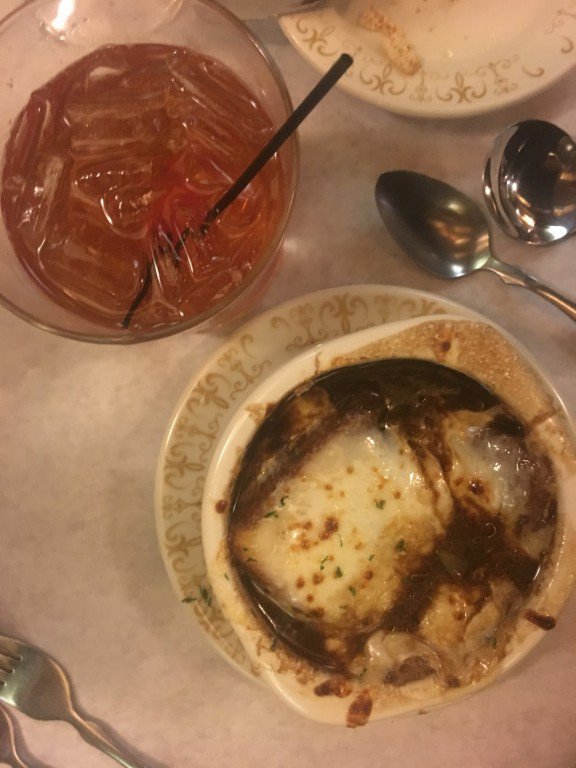 There were salads, too. (When was the last time you ordered “French” dressing in a restaurant? Escoffier never heard of it, but every Midwesterner has.)

Then came the main dishes.

It was time to sit up and pay attention: the plates presented Platonic ideals of their species. 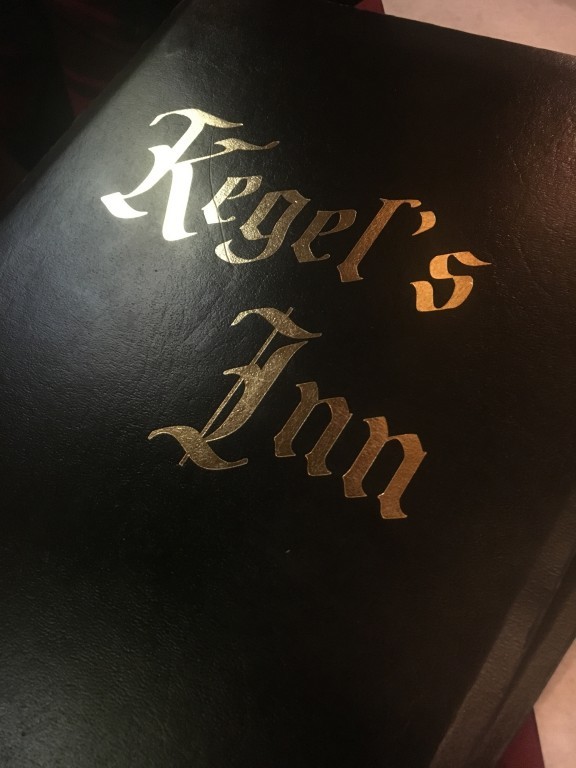 There was Wiener Schnitzel, the Vienna cutlet, made properly — with veal. It comes comes “à la Holstein” — with a runny poached egg on top. We’d never heard of that. It was beautiful. The lady in our party, an expert hairdresser who weighs about 90 pounds, made the foolhardy choice of Schweinshaxe, or roast pork shank. It was utterly delicious and textbook-perfect: a crisped fatty rind with melting-soft flesh underneath — but the dinner was almost the size of the diner.

She turned to the men around the table for assistance. In the end, all that was left were bones that would’ve delighted a paleontologist. 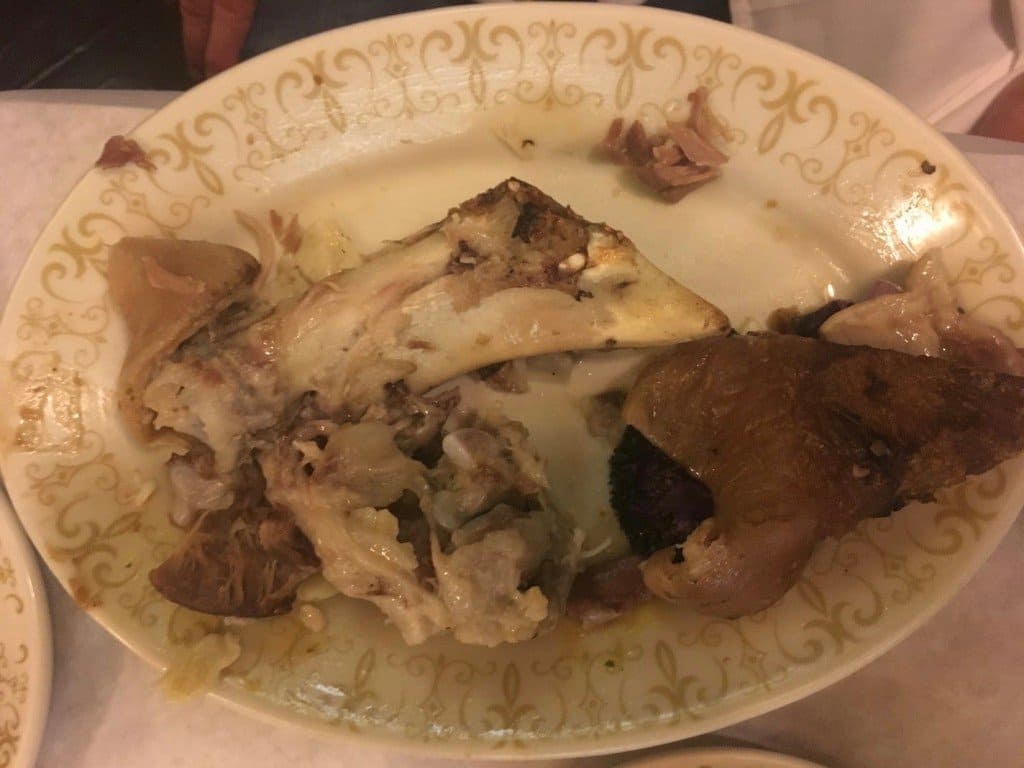 There was boneless duck, marked “our house specialty” and first on the menu list, served with cranberry sauce. It was worthy of its place of pride. Then there was Sauerbraten, which — as most Wisconsin folks know — is slow-roasted beef in a gravy with vinegar and ginger snaps. This version had been marinated for days and had plenty of tang. It came with a cheesy dumpling on the side. 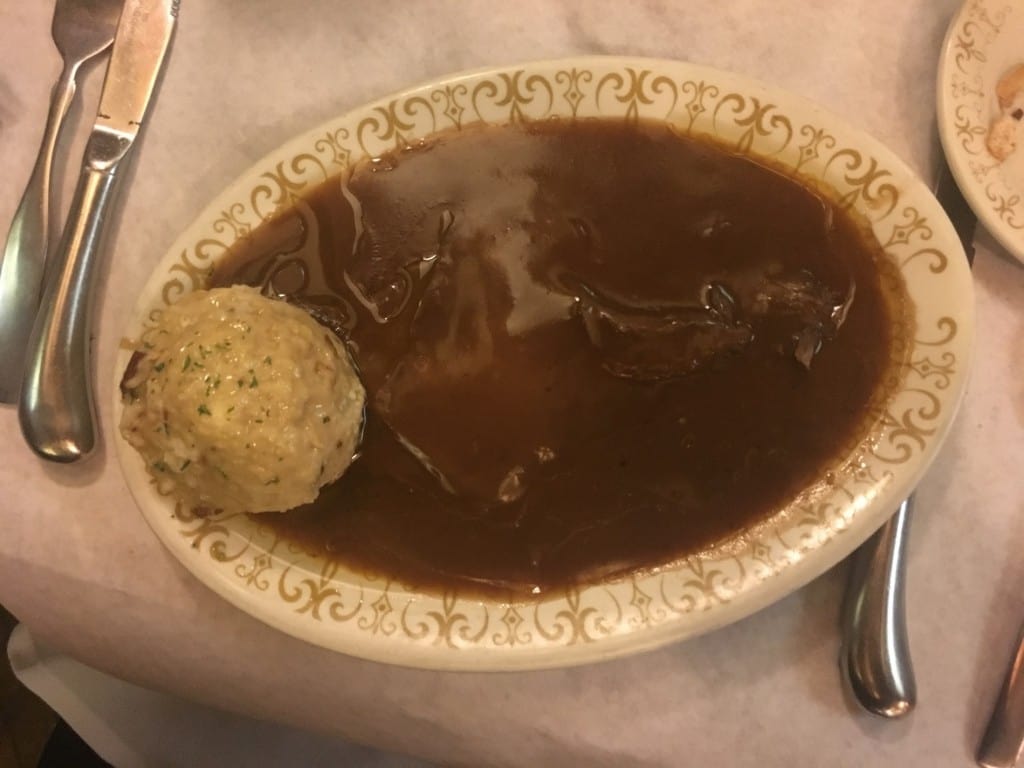 In case you are still hungry, a main course comes with sour red cabbage and Spätzle, the clumpy and comforting egg noodles.

And then there’s dessert. We ordered apple strudel — which comes hot and (if you like) with ice cream. Don’t you dare act surprised. We suspect we detect Catholic tracks in this establishment. Since the original Kegel was an immigrant from Habsburg Austria, it may be that our nose does not deceive us. The Kegel website has a dedicated tab for Lent, explaining that the celebrated Fish Fry will be rolled out not only on Fridays but also on Wednesdays during the 40 days before Easter. A liturgically-minded restaurant.

And it’s closed on Sundays. The restaurant is still run by grandsons of the founder. Jim Kegel was there on the night we visited. He greeted us at the end of the bar and guided us to our place, his bald pate ringed by a fringe of white. An old gentleman of the old school, he might not object to being called “living history”.

What to make of all of this?

The downtown schnitzel palaces, much as we love them, can feel a bit stiff. There’s swarms of businessmen and tourists.

But Kegel’s is all Milwaukee. Despite the elegant surroundings, we caught a few men dining in their hats. A few of the ladies wore perms that — at least in the eyes of our resident hairdresser — seemed just as historic as the fat oak rafters. So much the better. This place is heimisch und gemütlich. Cozy and familiar.

It’s an immersive historico-cultural experience. Milwaukee is no stranger to the middle-European: our town hall looks like Hamburg’s. Our library is like one in Leipzig. The cathedral downtown is German Baroque. Architecturally, this place is in a league with all those establishments.

But here you not only admire the arches; you taste the Heimat. You take in its oomph and its ethos on a level that is literally visceral. And it tastes good.

Note that Kegel’s Inn is not just for the older set: ours were not the only unlined faces in the place that evening, and some of the older waitresses were trailed by bright young things. That suggests a healthy demographic pyramid for this establishment.

Kegel’s might be around for a fifth generation. We sincerely hope that it is.

Before it vanishes into the mist.